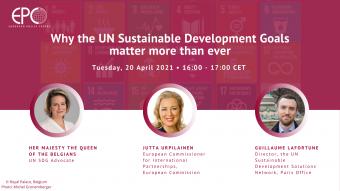 Almost 6 years ago, the international community unanimously adopted a roadmap to a more sustainable future. Agenda 2030 and the 17 sustainable development goals were born out of a shared perception: we needed a new definition of progress. “Business as usual” was no longer an option. Major economic, social and ecological imbalances were taking us down a dangerous path.

The SDGs helped us connect the dots. Climate change and poverty, biodiversity and human wellbeing, depletion of natural resources and instability, governance and inequalities are all related. And they all need urgent and equal attention.

This new UN Agenda was designed to be truly universal. It underlined the interdependence between north and south, between prosperous and poor, between people and planet. It also sought to complement and multiply the impact of official efforts by encouraging innovative partnerships, with the private sector, academia, and civil society.

Awareness of the SDGs grew. They were embraced by many stakeholders: international institutions, governments, business, citizens, think tanks and philanthropic organizations. They gained in support and in credibility. They became a reference in sustainability reports, in policy papers and in academic research.

Unfortunately, real action for their implementation remained uneven and sometimes sluggish. We fell behind in fighting climate change. Inequalities grew further. Hunger rose again. The world was definitely off track. The UN Secretary General, Antonio Guterres, raised the alarm and the UN launched a Decade of Action for the SDGs.

Then came the COVID-19 pandemic, which has caused immense suffering. Millions of lives have been cut short. Many will bear the consequences of physical and mental trauma for years. Around the globe, jobs and incomes have been lost. Schools have closed for months at a time. Domestic violence has risen to unprecedented levels. COVID-19 has disproportionately hit the most vulnerable. It has also shed a harsh light on how inequalities and social injustice pervade even the most prosperous societies.

The pandemic has affected us all, one way or another. But it has also demonstrated vividly how we are all connected. How we are responsible for each other. How one’s actions affect others. How inaction, in one part of the world, can have dramatic consequences on the other side of the globe. Not only for now, but also for the future.

As we move toward recovery, we might be tempted to recreate the world as we knew it, to resume our way of life. However, we are now better equipped to grasp the need for change. To reason and act differently. To plan for the future. To pay more attention to and deal more swiftly with alerts. To be mindful of the longer-term consequences of our choices and actions. To build our own resilience as interdependent societies and people. To leave no one behind. And, moreover, to do no harm along the way.

Interconnectedness, future-oriented action and shared resilience are at the heart of the SDGs. As we embark on rebuilding and on building better for the future, we are lucky to have at our disposal this readily available guide for a coherent transition and transformation. We should rely on the SDGs to the full extent of their potential. Obviously, they are a precious accounting and monitoring mechanism for registering and comparing progress. They are also a well-thought-out toolbox to help us to move ahead on all fronts. More importantly though, they present us with a reasoned and coherent picture of the future we are trying to achieve. For this, they need to be fully embraced by all stakeholders. The European Green Deal has clearly shown the way in this regard.

As has often been stated, this crisis offers a once in a generation opportunity to fundamentally rethink our economies and our societies. Fortunately, the groundwork laid down at the United Nations, some years ago, remains ever more relevant. It is available to all those who want, and need, to work on the transformation that will secure a sustainable future - for all. This opportunity should not be missed.