Skip to main content
Home / Agenda / Address by Her Majesty the Queen on the occasion of the 60th edition of the scientific colloquium Connecting the Dots: One Planet, One Health, One Future

Address by Her Majesty the Queen on the occasion of the 60th edition of the scientific colloquium Connecting the Dots: One Planet, One Health, One Future 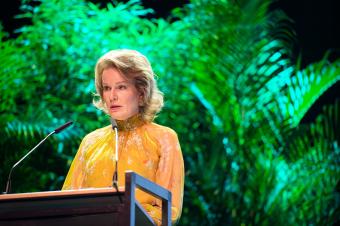 The Human Side of Health

It is with great pleasure that I take the floor at this important symposium.

As a UN SDG Advocate, I have always paid particular attention to SDG 3, Ensure healthy lives and promote wellbeing for all at all ages. Good health is a goal in itself, but it is also a precondition for the attainment of the other SDGs, for guaranteeing that each individual can reach his or her potential, and for ensuring a country’s prosperity.

When they adopted Agenda 2030, the Member States of the United Nations envisaged “a world free of poverty, hunger, disease and want, where all life can thrive. […] a world free of fear and violence. A world with universal literacy. A world with equitable and universal access to quality education at all levels, to health care and social protection, where physical, mental and social well-being are assured.” And no one should be left behind.

Throughout the High Level Week at the United Nations, in which I participated recently, health was high on the agenda. UN member States unanimously adopted a political declaration on universal health coverage.

The declaration pointed to the major gains in recent decades: the overall increase in life expectancy; the reduction of maternal and under five mortality; and the success of campaigns against major diseases. But inequalities in health care remain considerable. Half of the world’s population still lack access to essential health services. Emerging and re-emerging diseases are a challenge. So, too, are non-communicable diseases and mental health problems, neurological disorders, malaria, HIV-AIDS, tuberculosis and antimicrobial resistance.

In recent decades, medical research and development have consistently brought new hopes and produced new solutions in terms of advocacy, prevention, treatment and cures. New technologies are opening creative avenues for access to health care. Cell phones bring patients in far-flung areas in contact with their doctors in many regions of the world. Communities are innovating local solutions for local problems.

The Institute for Tropical Medicine has made an invaluable contribution to medical and scientific research on tropical diseases, benefitting developing countries in particular. It has fostered major discoveries, for example, concerning Ebola fever. It is engaged in renewed efforts to eradicate sleeping sickness. It has trained generations of new doctors, new researchers, new scientists, from all over the world, who will continue working to make health care available to all, in their own countries and regions, but also globally.

Its vast network of alumni is a huge reservoir of knowledge and a dynamic source of multidirectional exchange, going far beyond traditional North-South knowledge flows.

Nevertheless, yes, many dots remain to be connected. New issues emerge.  Patient research, extraordinary discoveries that save so many lives, scientific rationality, are sometimes confronted with basic human facts. Poverty is fertile ground for poor health and disease, and a major obstacle to accessing health care. Lack of education or understanding remains a barrier to making informed decisions regarding one’s health.

Gender inequality too often translates into health inequality as well. Conflicts not only threaten the survival of entire populations, they also disrupt precious health care systems for years. Unhealthy foods in both wealthy and poorer countries cause obesity and related disorders.

A few weeks ago, in Brussels, I attended the Global Summit on Vaccination, under the auspices of the European Union and WHO. Many years of successful campaigns have led to the eradication of smallpox. Other diseases, most notably polio, are close to eradication. Yet some populations still have no access to vaccination. Worryingly, developed countries, are now facing a wave of skepticism about vaccination, including from some well-educated parents.

We are all aware of the major breakthrough in terms of understanding Ebola fever that your Institute has achieved. New vaccines against the disease are now available. But sometimes populations remain distrustful, not only of vaccination, but also of hospitalization and treatment, as we have seen.

So, how do we build - or if necessary rebuild - and maintain trust in science and health care? How do we fight rumors and fake news? How do we adapt messages about health for their intended consumers? Where do we find the leaders, the elders, the peers to spread these messages convincingly?  Responding appropriately can be complex.

The motto is well known: “No good health without good mental health”. Tomorrow, October 10, is World Mental Health Day. The Secretary General, Antonio Guterres, has decided to put the issue of Mental Health higher on the Agenda of the United Nations. As a rule, I have included Mental Health awareness in much of my advocacy.

But in many countries, it remains taboo, still too difficult to discuss. As I have said so often, we need to break the silence. The root causes of many mental health issues are still uncharted territory, although some aspects of prevention are making inroads.

In populations affected by conflict and by extreme poverty, we tend to the physical wounds and diseases. But what about a husband whose wife has just died in childbirth, whose parents will not recover from malaria, and whose baby will not survive even a few months? How is he to carry on, with the burden of his psychological trauma? Huge gaps and huge inequalities remain between rich and poor, in accessing counseling and treatment.

The Sustainable Development Goals are an ambitious roadmap. The message in New York a few days ago was clear: if the international community is serious about fulfilling its commitments by the 2030 deadline, it needs to accelerate their implementation.

The SDGs are all interlinked. We have better insight now into how they support each other mutually and how they can be pursued jointly. We know that further deterioration of the air we breathe, the quality of our food, and life on the planet will have immense negative consequences for the attainment of SDG 3. But we are also fully aware that good health for all remains a crucial building block for all the SDGs.

Only the spoken word counts.