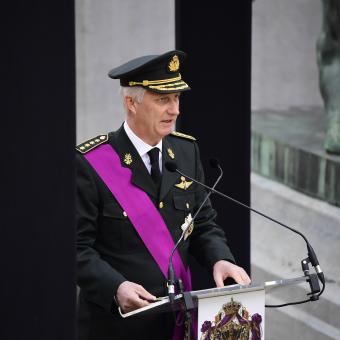 Exactly one hundred years ago, at this very moment, the call of bugles all along the front announced the ceasefire. Led by King Albert I, the Belgian army had shown great courage in recapturing our country. The sound of the bugles heralded the end of a war that had spread death and destruction, one that would leave deep scars on soldiers and civilians alike.

Today, once again, we stand respectfully before the tomb of the unknown soldier. And our thoughts return to that merciless struggle.

This majestic monument emanates an aura of greatness. The greatness of the heroes of the First World War, who fought and fell for their country. For our country. But at the same time, the monument emanates simplicity, the humility associated with the mystery of that maimed and nameless soldier. Undoubtedly, he would have wanted to tell us his story, he would have stood in the spotlight that shines on him today. But his real calling lies in namelessness and silence.

This unknown soldier stands, of course, for all the heroes and victims in our own families, our loved ones, our parents, our grandparents. They are present here too. This unknown soldier invites us to look deep into ourselves, to give meaning to his death. This soldier is each one of us.

We live in a world where images dominate. A world where we must see and know everything immediately. It is reassuring to realise that human greatness also lies in the unknown, in anonymity. That humanity hides behind the veil of modesty, suffering and sacrifice, as well. And that the mystery is even more powerful, when not all is said.

This Congress column, erected in honour of our first parliament and our first sovereign, is guarded by the unknown soldier. It embodies a message from the past, but it also points the way to our future. It invites us – and especially young people – to work together for a peaceful world. One where we can all make our own unique contribution. With cheerful realism, in large and small ways.

Finally, I would like to say to the young people here, the day will come when we will no longer enjoy the heartening presence of the veterans who defended our territory. I am committed to keeping alive, with you, the memory of those who sacrificed themselves for us and the values for which they fought. The finest tribute you can pay them is to become a hero yourself. By remaining true to yourself and your vocation. By being there for others. By choosing depth, rather than what is superficial and fleeting. By shining brightly and standing firm in life.