Remarks by Her Majesty the Queen – Children in armed conflicts 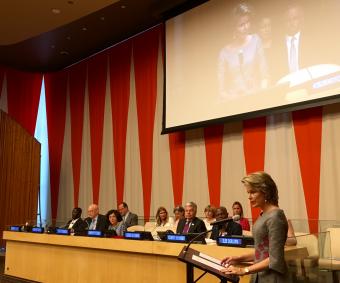 Address by Her Majesty the Queen of the Belgians

Rehabilitation and reintegration of children affected by armed conflict:

I am delighted to be able to introduce this event today: a panel debate featuring first-rate speakers, all of whom are personally committed to child advocacy.

The question we are addressing this afternoon is a matter of the highest importance. If there is one cause we must strive for in these unsettled times, it is the future of our children. Their future is our responsibility and our societies will benefit from their development. That is exactly why the harm caused by war and conflict is of major concern.

Twenty years ago, the ground-breaking Machel Report on the Impact of Armed Conflict on Children revealed the devastating effects of armed conflict on all aspects of child development.

The protection of children’s rights is a cause that is particularly dear to me personally. So I consider it a privilege to be able to take an active part in raising awareness and advocacy on their behalf, both in my own country and at the level of the UN organisations. As Honorary President of UNICEF Belgium, I closely follow the impact and consequences of armed conflict and emergencies on children.

Your Excellencies, Ladies and Gentlemen,

Your presence in such large numbers at this event shows your shared commitment to the rights of the child in a world that is rapidly changing. On the one hand, there have been many positive developments. On the other hand, new challenges have emerged as well.

During my field visits over the past 15 years, I have witnessed considerable progress in terms of increasing respect and protection for children in conflict zones. I have seen children reintegrated into their communities; I have seen child trafficking networks dismantled and children able to go back to school; I have seen children get better access to clean water, food, medical care and education.

However, there are still many violent conflicts around the world, as well as several so-called ‘forgotten emergencies’. UNICEF recently released its annual report on ‘The State of the World’s Children’. It reveals that nearly 250 [two hundred and fifty] million children currently live in places affected by armed conflict.

The changing nature of warfare in different parts of the world makes it more and more difficult to protect these children. The intensity of the crimes against them is increasing, and the nature of the perpetrators is changing. There are more non-state antagonists these days. One element that has a significant negative effect on children is the rise of violent extremism in recent years. Young people are often the direct targets of acts intended to cause maximum civilian casualties. Another new and compounding challenge is the use of social media to recruit minors.

The impact on children of our collective failure to prevent and end conflict is devastating. In fact, conflict prevention should be our common goal. Increased efforts should be made to identify long-term solutions that will reduce and mitigate the root causes of conflict, such as poverty.

Research shows that effective reintegration programmes for children are not only crucial for their own well-being, but are also a critical factor for durable peace and security. In a sense, such programmes are a preventive measure and a tool for breaking the vicious circle of violence.

For that reason, we are putting the emphasis today on an often forgotten aspect of children affected by armed conflict: their reintegration and rehabilitation, and in particular their psychosocial rehabilitation and social integration.

The physical effects of armed conflict are obvious and may heal. Emotional wounds, however, are not always visible and may last much longer, if not forever. Children who have experienced such traumatic situations need special care, especially psychosocial support, long after the armed conflict has ended. Often they have been deprived of the chance to go to school for years on end. So they require education programmes tailored to their particular needs and skills development.

As was pointed out at the International Interdisciplinary Conference in Brussels, in 2009, there is no such thing as fast-track rehabilitation and reintegration of children affected by armed conflict. We need to engage in long-term programmes; we need to develop a comprehensive approach; we need to reach all children affected by conflict, not only child soldiers; and we need to be aware of the diversity of the children involved.

After enduring the horrors of armed conflict, children and youth should not give up on their dreams and aspirations. We must all do more to provide them with opportunities to heal, to learn and to thrive again. If we help mend their hearts and minds, we will inspire and empower them to help rebuild their countries. That should be our collective primary motivation. Children are our most precious resource, for they represent the future of our societies.

I shall listen, therefore, with great interest to what our guest speakers have to say today.