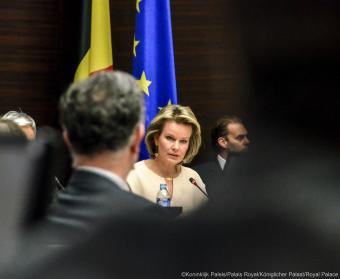 Every child deserves a safe childhood.

This thought constantly crossed my mind when I visited the Zaatari camp for Syrian refugees, in the North of Jordan, a few months ago.

It is just over twenty years since my fellow SDG Advocate, Graça Machel, presented her groundbreaking report on the impact of armed conflict on children. Since then, the international community has become increasingly aware of the scope and seriousness of the problem. The Secretary-General of the United Nations has appointed a Special Representative for Children and Armed Conflict. Efforts to universalize implementation of the Convention of the Rights of the Child have been increased. And a protocol has been added that specifically addresses the situation of children in armed conflict.

In 2005 the Security Council established a monitoring and reporting mechanism on the use of child soldiers. Most recently, the Sustainable Development Goals likewise address the issue of Children and Armed Conflict.

Significantly, NATO has developed its own policy document on children in armed conflict, in close cooperation with the United Nations. Concern for children’s safety is now an integral part of the planning of NATO operations and missions, as well as training and reporting.

The EU, too, has adopted guidelines and an action plan to monitor areas where children are particularly at risk. It fully supports the work of the UN in this field, as do other organisations, including the African Union and NGOs.

My own country, Belgium, is a longstanding partner and supporter of the work of the Special Representative of the Secretary-General for Children and Armed Conflict. As a member of the so-called Group of Friends, Belgium actively works to promote this issue in New York and co-chairs the Group in Geneva. Within NATO, too, Belgium plays a leading role. Active participation in these organisations keeps the issue on the agenda of the international community.

So we have made progress, Ladies and Gentlemen.

In all too many parts of the world, large numbers of children are still victims of violence: violence from extremist groups, warring factions, other countries and sometimes even their own governments. According to UN estimates, several million children have been killed or badly injured in the past 20 years, as a result of armed conflict. UNICEF’s 2016 report on the State of the World’s Children revealed that nearly 50 million of them currently live in places affected by conflict. Only this week we heard that a record number of people were killed or injured in Afghanistan last year. One third of them were children.

So we must never become complacent. Nor must we become immune to the images that confront us daily in the media or in the field. We have the legal and moral tools to protect children from suffering and injustice. We must be even more dynamic in applying them.

The dramas children experience in conflict situations are multiple. Families are torn apart; social environments broken or destroyed. Children are deprived of essential medical care and education. They are displaced from their homes, abducted, abused and even trafficked. Young and adolescent girls are particularly vulnerable.  Subjected, all too often, to sexual violence, early pregnancy and forced marriage, they bear the scars forever.

Children are not just caught up in conflict, they are often cynically and ruthlessly targeted. Some are forced into service as child soldiers, with no other option than to kill. Their childhoods come to a brutal and early end, their innocence and often their futures stolen from them. Their lives defined by violence and horror, these children are usually traumatized and dysfunctional by the time the conflict ends.

Their primary concern is survival, how to cope with basic needs. The emotional part comes later. Reintegrating them into their communities and rehabilitating them is a major and lengthy challenge. We must be guided by the children concerned and work closely with local communities to provide the support they need. With a quarter of a million children currently estimated to be involved in armed conflicts worldwide, the task is huge.

At the United Nations last summer, a former child soldier from Sierra Leone emphasized the importance of education to help such children reclaim their lives: “their youth, if not their childhood”, as he put it. Teaching them the skills to make a living and have a valuable place in society is vital.

At the same UN event I, too, drew attention not only to the physical effects, but also to the psychological and emotional wounds children suffer in war zones. All children, not only child soldiers, can be seriously affected by the atrocities of armed conflict and suffer severe mental health problems as a result. The impact may last well beyond the actual conflict.

Indeed, the aftermath – possible long-term displacement, loss of family members and a livelihood – frequently add to the trauma. Child victims of conflict need special care. In particular, they need psychosocial rehabilitation and support.  And they continue to need it long after the armed conflict has ended.

The international community has stepped up efforts to increase awareness and mobilization. But while it is critical to strengthen the mechanisms to protect children in armed conflict, we should not lose sight of the primary goal: to prevent and end conflict, and safeguard peace.

Peace, justice, strong institutions, social cohesion and investment in partnerships are all equally essential for the protection of vulnerable people. Likewise, we must maintain our efforts to ensure humanitarian assistance, both during and after conflict.

As an Advocate for the Sustainable Development Goals and as the Honorary President of UNICEF Belgium, I personally am determined to continue my efforts to improve the plight of children affected by armed conflict.

This conference, Ladies and Gentlemen, is an opportunity to share experiences and best practices in the conception and formulation of policies, but also in the implementation of those policies on the ground. It is a chance to exchange views on the real challenges facing the international community in this context.

The conclusions must be pragmatic and operational. Dissuasive and preventive action, as well as sanctions against violations, will contribute to the fight against impunity.

We must work to increase complementarity and coordination.

And, of course, we must continue to increase awareness.

In short, this conference can give new impetus to our efforts to protect the safety and well-being of children in conflict situations.

Let us all do our utmost.

I am confident we can succeed.