Speech by His Majesty the King - Canadian War Museum 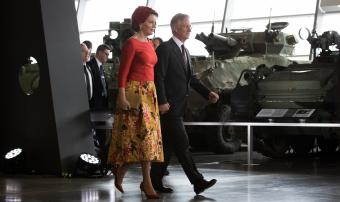 Queen Mathilde and I have come to this museum, which tells the story of the wars in which Canada has participated, above all to pay tribute. In this centenary year of the end of the First World War, I would like to express Belgium’s gratitude towards Canada.

The destinies of our two countries were tragically interwoven in the 20th century, during two world wars. You have preserved here the moving testimonies left behind by the Canadian soldiers, who twice came to fight and, for too many of them, to give their lives on Belgian soil.

Two battles, in particular, are seared into the collective memory. In the Second Battle of Ypres, in 1915, your troops were among the first victims of chemical weapons. And in the third, better known as the Battle of Passchendaele, in 1917, the Canadian losses were huge. The Canadian army played a crucial role in the liberation of Belgium in 1918, and it was at Mons that the last soldier, a Canadian, fell in the Great War, two minutes before 11.00 a.m. on 11 November 1918. It gives me great satisfaction to see that, thanks to the support of the Mons authorities, the Canadian artillery gun that fired the last shells of the war, can be presented here today. Once again in 1944, your soldiers bravely participated in the liberation of Belgium, playing a decisive role in regaining control of the port of Antwerp, which was vital for supplying the Allied forces in their liberation of Europe.

It has been almost 100 years now since the end of the First World War. But none of us here has forgotten it. Throughout the last century we have continued to remember it. The Last Post has been played every evening since 1928 at the Menin Gate in Ypres. It is Belgium's affirmation that we will never forget. By sounding the bugle every day, we pay tribute above all to the victims and to the soldiers of every nation. We recognise the brutality of war, and the long road we had to travel to recover and, ultimately, find reconciliation. Finally, we remember the time that was needed to restore peace again, not only the peace obtained by the laying aside of arms, but also the peace we need to bring comfort, rebuild and ultimately settle in our hearts.

Now, in the 21st century, new ordeals are being endured and new wounds inflicted. This work of remembrance helps us not only to reclaim our common past but also to be more present in our own time. We must continue to document and denounce evil when it is committed, but to do so without arrogance or a desire for revenge, without anger or resentment, guided by a spirit of respect and reconciliation. It is vital to confront our past in all its complexity, to scrutinise the actions of our forebears in their entirety, without making hasty generalisations, without easy slogans, resisting any temptation to simplify. Only in this way can our collective memory gradually be pacified.

This work of remembrance helps us to assume our own responsibilities. When, in the beautiful poem In Flanders Fields - written by a Canadian medical officer - the dead pass on the torch to the living, it is more than a call to arms, it is a call to us, the living, to take up the defence of freedom, peace and human dignity in our turn. It is only if we assume this responsibility that, as the poet says, the dead will be able to rest in peace. Our commemorations enable us to recognise the past, but also to become more aware of the vulnerability of the present. They invite us to experience life's adversities, without losing faith in humanity. That is why, by maintaining the memory of our dead, we renew a promise.

To remember is to honour those, to whom we owe a part of who we are. But it also means reassessing our heritage and responding to a need for justice. Many people have suffered discrimination, persecution and catastrophes. Today, many people are victims of terrorism. Let us learn from these ordeals and wounds, and let us take up the torch in a spirit of peace. Let us, in our words and actions, react to what divides us by that which unites us.

There is no more fitting tribute to the innocent victims of our history than living life by making - and continually reaffirming - an act of faith in humanity.