Skip to main content
Home / Agenda / Speech by His Majesty the King - Esplanade of the Palais du Peuple, Kinshasa

Speech by His Majesty the King - Esplanade of the Palais du Peuple, Kinshasa 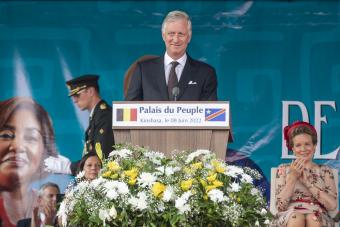 Good afternoon to all! Mbote!

Three times we had to postpone our trip. Today we are finally here among you, and we are delighted to be here.

This proves that one should never despair.

The Queen and I are setting foot on Congolese soil for the first time.

Thank you very much, Mr. President, for your invitation.

We are very happy to discover your country and we are touched by your warm welcome!

I am speaking here, through all of you, to all the Congolese people.

I want to tell you the affection and friendship that I always feel towards you in Belgium.

You, the women and men of this country, are the heart of your nation. When faced with difficult situations, your dignity and courage command respect.

We also salute you, the children and young people who represent the vast majority of the population. With your dynamism and creativity, backed by the experience and wisdom of your elders, you are the future of the country.

Congolese culture is rich in its diversity and the traditions inherited from its ancestral past. In it is expressed the Congolese soul, marked by the extraordinary vitality that characterizes it.

And your natural heritage and its incredible biodiversity, forged in the sinuosities of the vast Congo River, are essential for maintaining the equilibrium of our planet.

Sixty-two years ago, Congo and Belgium turned an essential page in their common history. Your country has since taken its full and rightful place in the concert of nations.

Today, you want to write a new chapter in our relations and look to the future, encouraged by the formidable youth of the Congolese people who ask only to develop their talents.

Let us write this new chapter together.

Without forgetting the past, but rather assuming it fully, in order to transmit a thoughtful and pacified memory of our shared history to the new generation.

Although many Belgians were sincerely committed, and deeply loved Congo and its inhabitants, the colonial regime as such was based on exploitation and domination.

This regime was one of an unequal relationship, in itself unjustifiable, marked by paternalism, discriminations and racism.

It led to abuse and humiliations.

On the occasion of my first trip to the Congo, right here, in front of the Congolese people and those who still suffer from it today, I wish to reaffirm my deepest regrets for these wounds of the past.

Sincere regrets that I had expressed in the letter I addressed to you, Mr. President, two years ago now, for the 60th anniversary of independence.

You and I are too young to have experienced Congo before its independence.

But for you, as for me, the Belgian presence in Congo, before 1960, also left a legacy that has anchored the country in its current borders.

The preservation of the territorial integrity of Congo is a major concern that we share.

Even before the independence, future Prime Minister Lumumba advocated maintaining the unity of the Congolese nation. Today, the instability in the East of the country, where inhuman violence and impunity too often prevail, remains a great source of concern for us all. This situation cannot continue. It is the responsibility of all of us to do something about it.

You can count on Belgium's support, within the international bodies, for any initiative to improve the stability and harmonious development of the Great Lakes region of Africa. The gradual resumption of our military cooperation is in keeping with this approach.

Beyond the relations between States, thanks to a very special affinity our two peoples have been able to forge rich and varied interpersonal links that today are helping us to build the future together.

At home, I regularly meet Belgians of Congolese origin who contribute intensely to the social, economic and cultural life of Belgium.

We are grateful to them.

We also remember your soldiers who fought alongside ours on various battlefields of the two World Wars. We have a duty to remember their sacrifices, as I made a point of mentioning this morning when honoring the last Congolese veteran of 40-45.

In the areas of health and education, there are ongoing achievements that unite our two countries to this day.

The Ebola virus was discovered by both a Congolese and a Belgian, Drs. Muyembe and Piot.

As the last European Union-African Union Summit in February underlined, we, Europeans and Africans, are geographically close and interdependent in today's globalised world.

We therefore have every interest in joining forces to respond to our many common challenges together.

This requires a great sense of collaboration, a true partnership of equals, and a creativity that meets today's challenges.

The voice of the Congolese and Africans must be heard and taken into account in all major contemporary issues.

In this regard, Mr. President, especially in these difficult times for your country, I would like to commend your efforts for putting Congo back on the map of the continent, renewing dialogue with your neighbours and seeking global solutions to the region's problems together.

In 1970, King Baudouin already noted that "Congo in the heart of Africa, Belgium in the heart of Europe, can no longer formulate their problems in exclusively national terms."

The future of the generations to come, in Europe and in Africa, depends to a large extent on our ability to cooperate in this direction with lucidity and conviction, starting today.

Over the decades, cooperation between our two countries has had its ups and downs. In recent years, it even lost its dynamism. It was time to revive it. Today, the foundations for a new bilateral partnership are being laid. Congo thus remains our most important partner in Africa.

In the next few days, the Queen and I will also have the chance to travel to Lubumbashi and Bukavu.

Both here and there, we will have the opportunity to visit a number of projects led by women and men of your vibrant civil society.

So many Congolese men and women become involved without counting the cost, often anonymously, to benefit their community and its most fragile members. Today, we would like to pay tribute to them.

And let us here particularly salute the Nobel Peace Prize and King Baudouin International Prize for Development, Dr. Denis Mukwege, for the admirable action he is carrying out with courage and determination.

Through this trip, we want to emphasise that Belgium will continue to support all initiatives that contribute to the well-being of your country and offer the Congolese people a much needed improvement in good governance, prosperity, health, security and justice.

Our commitment to the DRC remains the same: a firm support to the stabilisation and democratisation of the country as well as to respect for human rights.

The opportunities of the Democratic Republic of the Congo are immense, its assets are numerous:

your primary forests that are so important for CO2 capture;

the abundance of minerals in your subsoil;

a huge river complex capable of powering what could become the world's largest hydroelectric system and thus enable the production of clean energy for the entire region.

It is your energy, your dynamism, your work, of all of you, that will transform these assets into an added value for the benefit of Congo.

It is with confidence in the future that we express our most ardent wishes to you, Mr. President, and to all Congolese people.

Congo has so much to offer the African continent and the entire world!