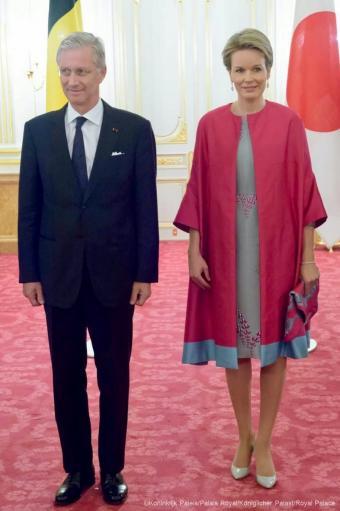 Thank you for your warm words of welcome. The Queen and I are delighted to be back in Japan and to deepen Belgium’s relationship with your beautiful country, one that we hold in high esteem for a long time.

Yesterday and today we had the opportunity to visit Their Majesties the Emperor and Empress and members of the Imperial Family and discuss the many affinities that exist between Japan and Belgium. I would like to thank you especially, Mr Prime Minister, for the hospitality that you have shown us and for the time you have made for us in your busy schedule. At our previous meetings in Belgium two years ago and again in May of this year, I have been moved by your attention to our country.

For our state visit, we were keen to be accompanied by a large delegation of entrepreneurs, university rectors, musicians and other professionals involved in our bilateral relations. Like the brightly coloured carpet of Japanese flowers that adorned the Grand Place in Brussels this summer, they are both witnesses to the intensity of our past relationships and the source of promising projects for the future.

I first came to Japan over thirty years ago. It was my first trip to the Far East and I still have a great affection for your country and its rich civilisation, which so successfully combines modernity and tradition, collective and individual dynamics. Since then, I have conducted many trade missions and several official and private visits to Japan.

We Belgians see Japan not only as a political ally, a trading partner and as the planet's third largest economy, but above all as a global power and a friend.

The earthquake that struck Japan in March 2011, taking the life of 18,000 people and devastating cities and the countryside, has shown the world the true face of a country and a people dignified in hardship and strong in solidarity. Your dynamism and renewed ambition through crises and disasters is an example for all.

This strength that spurs you on in difficult times is also the strength that we have seen at work for decades in Japanese companies in Belgium and Belgian companies in Japan. This strength is rooted in a keen sense of common interest. It also comes from your highly sophisticated civilisation and an absolute demand for quality. It has a ripple effect on all those who have the opportunity to work with you. I am therefore delighted to see Japanese investment in Belgium and Belgian investment in Japan continue and grow. Our governments have a duty to optimise these cooperation projects, since both the similarities and synergies between our countries are important and productive.

You also use this strength for the world. We are grateful for your unwavering support for world peace and cooperation. This support is manifested through your contribution to the work of the United Nations institutions, your targeted actions for development and your initiatives for maintaining and consolidating peace.

As President of this year's G7, you are lending great impetus to addressing global challenges, particularly in terms of the economy and trade, migration and the fight against terrorism. The organization of the Olympic and Paralympic Games in Tokyo in 2020 creates another mobilizing outlook for your country and is a source of enthusiasm for the whole world.

Belgium shares your faith in multilateralism and the need for institutions that are able to cope with the demands of globalisation. As a founding country of the European Union, we remain convinced of the immense benefits of this cooperation. Belgium will continue its vigorous defence of the added value and credibility of our structures for dialogue and cooperation, whether in Europe or internationally.

Belgium and Japan are stable and reliable partners for each other. 150 years ago, Belgium was the 9th country to establish diplomatic relations with Japan and it quickly became Japan's 3rd most important trading partner. Since then, our contacts in the economic, cultural and societal fields have continued to be mutually inspiring and enriching. I am pleased to see this cooperation continue and strengthen.

I invite you to raise your glasses to the health of Their Majesties the Emperor and Empress and the health of the Prime Minister and Mrs Abe.