Skip to main content
Home / Agenda / Speech by His Majesty the King of the Belgians at the State banquet hosted by Her Excellency Katerina Sakellaropoulou, President of the Hellenic Republic, Presidential Mansion, Athens

Speech by His Majesty the King of the Belgians at the State banquet hosted by Her Excellency Katerina Sakellaropoulou, President of the Hellenic Republic, Presidential Mansion, Athens 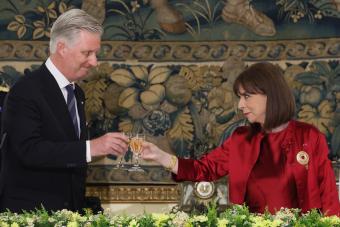 Queen Mathilde and I thank you sincerely for your invitation to come to Greece.

This afternoon, as we honoured the memory of your Unknown Soldier, we felt the full weight of the history of your country. "For the whole earth is the tomb of famous men," reads the inscription on the wall of the monument, taken from the funeral oration of Pericles, as recounted by Thucydides in his work “History of the Peloponnesian War." Next to this inscription, we saw the names of all the battle sites where Greece and Belgium have stood side by side to defend the values of freedom and dignity. Wars in which our soldiers gave their lives, to quote Thucydides, for the whole world. Nowadays, we would say for universal values.

If today we are building together this beautiful European project in which we strongly believe, it is because we are united around these same values.

The Queen and I are deeply moved to be here not far from the Acropolis, where these democratic values were born 2,500 years ago and where men such as Pericles taught the Athenians the strength and hope they could draw from their democracy and a life lived in accordance with these principles.

In our world, in which democratic values are being abused and are losing ground, should we not return to the source and the roots of our European civilisation and culture in order to motivate young people to make them their own? Should we not get back to the "Paedeia", the culture whose vocation was to form the human being to become a responsible citizen?

Your ancestors the Ancient Greeks taught us so much that remains more essential than ever for today's world:

That Justice in all its facets remains the leading virtue at both a personal and a political level.

That the world we are building remains at human scale. Man must be "the measure of all things", said Protagoras.

That in a world in which emotions are all-powerful and sometimes a source of violence, we must retain an unfailing trust in reason. As the founding fathers of European philosophy - Plato and Aristotle - did during a time of political crisis.

Many Greeks have founded active diasporas and enriched their host countries while remaining very attached to their country of origin. This is the case with Belgium. I welcome the spontaneous bond of mutual respect and genuine affection between our two peoples and countries. These bonds are, of course, historical, as our two countries gained their independence in the same year, binding us forever as modern nations. A Greek community of more than 40,000 people has made a significant contribution to the industrial deployment of Belgium and remains very active in many different fields, from contemporary cultural creation to business and politics. The interaction between our countries is enhanced by the dynamic involvement of Belgian universities in archaeological study and research in various locations in Greece. Not to mention the many Belgians who travel to Greece every year to discover its historic treasures and explore its diverse natural beauty.

Less than a decade ago, your country and people had to face an extremely difficult situation. You did so with courage and resoluteness, driven by the choice to keep Greece at the very heart of the construction of the European Union. This European vocation of the Greek nation is reflected in its participation in all the mechanisms that strengthen us as a continent, including our common currency. We are aware of the sacrifices that have been made in this regard and we have seen the dignity and determination with which you overcame the obstacles, like the odyssey of the Greek people, who have shown such great resilience throughout their history.

Today you, together with us Belgians, are among the most passionate Europeans. We know we can rely on you, and you know you can rely on us. Belgium and Greece are firm partners in this common project to build a strong, unified Europe, a Europe that creates a prosperous, open society and is based on the principles of freedom, democracy and peace. Recent events have reminded us that we must not take these foundations and values for granted and that protecting them requires our constant efforts and attention.

This State visit highlights our desire to strengthen this true European partnership between our two countries. It motivates us to invest in wide-ranging projects on energy security and climate change, which are so closely linked.

If Greece is and remains the country of Ulysses, it is because 3,000 years ago, Homer wanted to train young people to be just like this hero who had such human qualities and virtues as practical intelligence, a curiosity that led him to discover new horizons, determination to the point of resilience and loyalty to his values. These qualities have remained with the Greek people to this day. They are magnificent qualities that are familiar to us because, in a way, we share them with you. I am confident that the future will bring further wonderful collaboration, so that we can achieve many ambitious projects together.

And, to quote Greek poet and Nobel Prize winner Odysseas Elytis, "The journey seems to never end. And that is good."

In this spirit, I invite you to raise your glass to the friendship between Greece and Belgium, and to the health of the President of the Hellenic Republic.