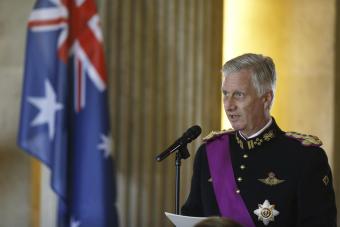 Speech by His Majesty the King of the Belgians
at the State Dinner in honour of His Excellency the Honourable Sir Peter Cosgrove,
Governor-General of the Commonwealth of Australia and Her Excellency Lady Cosgrove
Castle of Laeken, Wednesday 27 June 2018.

Queen Mathilde and I are delighted to welcome you and Lady Cosgrove to the Castle of Laeken. We met in September last year, when you participated in the 100th commemoration of the Battle of Polygon Wood in Zonnebeke.

During the First World War, Australian troops were deployed from March 1916 to October 1918 on the Western Front in France and Belgium. The Australian Imperial Force took part in the famous battles of Messines and Passchendaele in 1917. In the course of the war, more than 420,000 Australians, out of a population of less than five million, volunteered to serve in the military. Over 61,000 sacrificed their lives. 12,000 fell on Belgian soil. It was by far the greatest wartime loss of Australian lives in your country’s history.

So, once again, I want to express Belgium’s gratitude to the Australian people. We have a duty to remember this sacrifice. Our shared history also reminds us how fragile today’s world order is. Globalized conflict could happen again. Just 22 years after the terrible Great War, the Second World War broke out and made even more victims. In the aftermath of this war, we tried to protect ourselves forever from new disasters, by building a new world order and another ‘Front’, one of common values. Today, this international system is under pressure and cracks are emerging. Populist leaders are gaining ground, using nationalist and protectionist slogans. Existing frameworks of cooperation are being questioned.

In this context, countries like Australia and Belgium have a key role to play in building a sense of mutual trust and continuing to promote rules over power politics. We do this together, as members of a number of multilateral bodies, not least the Human Rights Council. We do it through our involvement in peacekeeping operations and in peacebuilding. Belgium will continue to act in this spirit of dialogue within the European Union and, for the next two years, as a member of the Security Council. I know this is also the spirit that guides Australia in the leading role it plays in preserving the Trans-Pacific Partnership, and in investing in the Free and Open Indo-Pacific Strategy.

Obviously, peace and stability start within our own countries. As you said, Governor-General, in your inaugural address to the Australian Parliament, back in 2014, social inclusiveness remains a work in constant progress. In Australia and in Europe, we know that it is only by fighting poverty, inequality and oppression at home, that we will eradicate frustration, aggression and violence. Australia proudly stands as a symbol of "fair go", a land of opportunities that gives everyone a chance to prosper. Your national anthem, "Advance Australia Fair", refers to this ideal that you pursue – as we all do – in trial and error. Today, more than ever, we must foster inclusion and dialogue.

The human values for which we fought, and for which we still stand, explain the power of attraction we – Australians and Europeans – exert all over the world. Those values underpin our way of life, our work, our goals and methods of government. Australia is often referred to as "The Lucky Country", because of its wealth of natural resources, its climate and sparkling beaches. In truth though, its real luck lies in the sense of the common good that your country has shown over the years. The same is true for Europe and for Belgium, though we might be better known for our chocolates and our beers. Today, therefore, our common duty is to stand firm and to reach out to those other parts of the world, where these values have not yet found fertile ground. In helping them to combat poverty, to establish resilient institutions and to build lasting peace, we will help the whole of humanity to accede to a higher level.

Your Excellency, Ladies and Gentlemen,

What brings us here today and for the two days of the State visit is the friendship between our countries and citizens, and, above all, the hope that together we can build a better world. At "Waterfront" this Friday, we will stand in the middle of a human chain of 6,000 people, stretching a distance of 21 km, and launch our messages of hope into the sea. Just as the sailors who discovered Australia relied for guidance on the Southern Cross, represented on your flag, so we will launch our boats, confident in our ability to build a bright future.

I invite you to raise your glasses to the health of Her Majesty Queen Elisabeth and of the Governor-General of Australia and Lady Cosgrove.