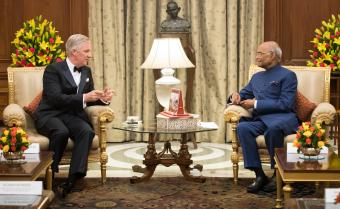 at the State Banquet hosted by

Mr. President, Queen Mathilde and I thank you for your warm welcome this morning and for the kind words you addressed to us a moment ago.

“Satyam eva jayate”, “Truth alone triumphs”. Only what is true, what is worthy, will prevail. This ancient wisdom from the Mundaka Upanishad, which is more than 2,500 years old, was adopted by your country as its national motto 70 years ago. In today’s complex world it is more valid than ever, and it will guide us through our visit to India.

Like so many Belgians and members of our delegation, we come to India with feelings of great respect and admiration. For your old and rich culture, which continues to fill us with wonder and to inspire us. For the greatness and the legacy of your leaders, from emperors like Ashoka and Akbar to Mahatma Gandhi. For your tradition of religious tolerance : more than 3,500 years ago, the Rig Veda already referred to “the One existence, which sages describe in many ways”. For the vibrant and peaceful evolution of your democracy, the world’s biggest. For the dynamism of your economy and your world leadership in so many fields.

Over the centuries, Belgium and India have developed a relationship based on trust. Since the first sailors from the Ostend Company arrived in 1723 on the shores of the Hooghly river, trade and investment have grown constantly. By bringing together their skills and tools, our entrepreneurs, our scientists, our artists, have narrowed the oceans and found common interests in a myriad of areas. Indians and Belgians have also shown abundant proof of their feelings of genuine mutual solidarity. The first Belgian congregations set up schools and hospitals in India in the 19th century. In the First World War, thousands of Indian soldiers gave their lives on the Western Front. Over the centuries we have stood shoulder to shoulder in many endeavors and we will continue to do so.

As we face new challenges together it is good to know we have such solid ground to build on. The world has become a village, global development goals have been agreed upon and our countries can complement each other in achieving them. Your government has launched ambitious projects, like Digital India, Make in India, Skill India, Start Up India, Smart Cities and Clean Ganga. They coincide with similar programs we are setting up in Belgium and in the rest of Europe. Government efficiency, the fight against inequality, labor market reform, we are all working on these issues. The context might be different, but we can learn from each other. As your Prime Minister said on Independence Day this year: “Badal sakte hai”, together “we can change”.

Belgium has always been at the forefront of European integration. It is at the heart of Europe, and Brussels is the capital of the European Union. India and Europe are both the size of a continent. Both contain a large diversity of cultures and languages. And both believe in the same values that underlie free and open societies. As a country at the crossroads of European cultures and languages, Belgium wants to be instrumental in strengthening this partnership and being India’s gateway to Europe.

The Hitopadesha was written in the 8th century as a guide for the education of princes. In its first chapter one reads: “With good people you should make friends and your friendship will last forever.” This State visit will certainly contribute to reinforcing such true and promising friendship. It is with this firm conviction in mind that I ask you to stand for a toast. (...) Excellencies, Ladies and Gentlemen, please join me in raising our glasses to the health of the President of India and Mrs. Kovind.