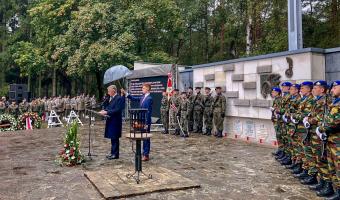 Over the six-year period of World War II, more than six million Poles lost their lives and five million foreigners perished on Polish soil.  Poland endured the most extreme trials and tribulations. Its population decimated, territory amputated, and its political system hijacked.

But wherever possible, your compatriots continued to fight, showing exemplary courage everywhere. In their own country, they formed the largest resistance movement in all of occupied Europe. And outside the country they created various army corps, which participated with tenacity and determination in some of the greatest battles of the liberation.

Four years ago, I visited the Warsaw Uprising Museum with you Mr. President.  In October 1944, the city's population, wanting to participate fully in its own liberation, rose up in a solitary and unequal struggle against the Nazis. The entire city was razed to the ground and over a million inhabitants killed or deported.

During the same period, other Polish nationals took part in the Liberation of Belgium. I am pleased to pay tribute here with you today to the many Poles whose blood was shed for us. Your compatriots, who are buried here in Lommel, joined the 1st Armoured Division, which was created shortly after the Nazi invasion, and trained in Great Britain. The 15,000-strong division crossed the Channel in July. And in September, it liberated several Belgian cities. Thank you. Belgium is grateful to Poland. "Dziękujemy wam Polacy." After the war, many Polish soldiers settled in Belgium and I am pleased to greet their children and grandchildren here today.

Unfortunately, despite their many heroic actions, their extraordinary sacrifices, your compatriots did not immediately secure Poland's freedom. Poland was subjected to another forty years of domination, this time by communism. We cannot forget this. During this period, your people displayed the same stoic strength that they exhibited during the war. They upheld, as Pope John Paul II said, “the fundamental values that they cherished and to which they wanted to remain loyal." It is this temperament and this inner flame that also helped bring down the Iron Curtain. Having liberated Europe, the Polish spirit shattered the shameful wall that still separated us.

Finally, after many years of oppression, the Polish people regained their freedom. Remembering the destructive barbarism of totalitarian systems, helps us understand the price of our freedom and what it takes to ensure that good prevails. That is exactly what we are doing in this period of remembrance. Today, Poles and Belgians stand together, side by side, committed to the splendid European project, which your country joined 15 years ago. A project that is rooted in reconciliation and mutual recognition. A project founded on respect for others and the desire to defend human dignity under any circumstance. A project that brings peace.

Today we stand here before the crosses of your soldiers, honouring the spirit that drove them forward. Their spirit is our common heritage.

Only the spoken word counts.