Speech by His Majesty the King - State Banquet 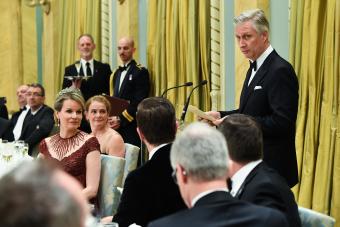 Queen Mathilde and I are very touched by your kind words. We thank you for your warm welcome.

Canada has drawn people to its shores for centuries. They are attracted by the purity of its nature, and the grandeur and authenticity of its landscapes. It is a land where people want to settle, a 'land of settlements', as its Iroquois name indicates so aptly. What also makes your country so attractive is the open-mindedness of its people. As my uncle, King Baudouin, emphasised during his State visit just over 40 years ago, Canada is characterised by a ‘subtle hospitality that makes visitors immediately feel accepted and integrated’. Ultimately, Canada captivates by its idealism and optimism, the faith in the future that you embody so wonderfully, Madam Governor General.

Responding to this call, men and women from every continent have made Canada their home - and continue to do so. From first nation peoples and pioneers - including your ancestors - to more recent migrants, they have all made their contribution to Canada's development and culture. They include Belgians, too. Some of whom have perpetuated the link with their native country, by giving the name their Belgian birthplace to the charming villages that welcomed them in Alberta or Manitoba, Ontario or Quebec. Today, 50,000 Belgian tourists visit your country every year. There are many young Belgians who come to your outstanding universities to study. There are researchers and teachers, who collaborate in the scientific field, and entrepreneurs and investors, who find dynamic and reliable partners in your country.

In your inaugural speech, five months ago, you evoked our extraordinary planet which, from space, looks like a blue marble against the infinite backdrop of the universe. And you drew a life lesson from it, putting our borders and our differences into perspective, and inviting solidarity and creativity, discovering new horizons and new solutions.

In this 21st century of rapid and profound change, our countries, which share the same roots and values, can reinforce each other. We must tackle the economic, social and environmental challenges, the disruptive phenomena of war, terrorism and illegal migration. We must find answers to the issues confronting us, particularly those resulting from the rise of new technologies. Our present era has brought many problems with it, for which we must assume responsibility together. More than ever, Europe and Canada must join forces, responding both to the need to protect our citizens in the face of these challenges, and the need to cooperate and innovate. Since its creation, Canada, the 'land of settlements and openness', has developed the know-how needed for such worthwhile objectives.

We have already overcome other difficulties together. One hundred years ago, the First World War came to an end. Belgium will never forget the fact that one quarter of the 60,661 Canadian soldiers who died in this global conflict lost their lives on Belgian soil. The painting in the Canadian Senate depicting the Cloth Hall of the devastated city of Ypres is an emblematic symbol of the brutality of war. Barely 26 years later, in 1944, Canadian soldiers once again demonstrated their solidarity, by courageously helping to liberate the port of Antwerp and taking part in the famous Battle of the Bulge. This strength and courage, which is so characteristic of Canada, is the best guarantee for the future.

Your Excellency, Ladies and Gentlemen,

We belong to the same big family of humanity. Canadians and Belgians share the same vision of a more just world, with respect for others. Our cohesion has been strengthened through adversity, and we are determined to continue to defend the values that underpin our societies. It is with this conviction that I ask you to please stand for a toast.

I invite you to raise your glasses to the health of Her Majesty Queen Elisabeth and of the Governor General of Canada.