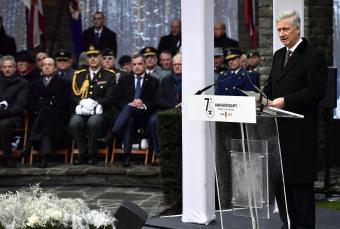 "The Belgian people remember their American liberators". The inscription on this memorial stone is etched on our hearts as well. Our gratitude extends to all the soldiers of the Allied countries, whose many representatives I warmly welcome here today.

The Battle of the Bulge was almost two months of intense fighting, hardship and suffering in the cold and snow. There were countless acts of bravery and heroism. The battle wreaked destruction and death. It resulted in even more civilian and military casualties than the Normandy landings. Belgium owes its final liberation from Nazi occupation to these brave soldiers.

"Nuts", the famous word uttered here in Bastogne by American General McAuliffe, signifying his categorical refusal to surrender, will continue to resonate in our collective memory for many years. It encapsulates the courage and resolve of our liberators. It echoes the legendary tenacity of the people of the Ardennes. It expresses a rejection of barbarism.

There are times when we must say no. No to the extreme evil perpetrated by a hateful ideology. This is what we did – together – seventy-five years ago. We said no to an ideology that proclaimed the superiority of one race over all others. An ideology that indoctrinated its own people and embroiled many others in its dark designs.

How many lives could have been spared, if men and women had not turned a blind eye to such discrimination and injustice? If they had been stirred sooner by outrage at the fallacious and racist claims ?

The America of 1944 defended freedom and democracy with all its strength. It continued to do so during the Cold War. We established NATO together seventy years ago. And thirty years ago we overcame another totalitarian ideology. After the Atlantic Wall, it was the Iron Curtain’s turn to crumble, faced with the resolve of the free world and the resilient and determined populations of Central and Eastern Europe.

Since then, we have gradually built a new Europe based on reconciliation and a firm desire to put age-old rivalries to rest. Throughout these years, the United States has been like "a shining city upon the hill", standing shoulder to shoulder with Europe, ready to support and lead other countries who shared the same values.

Today, the struggle is still not over. By definition, democracies are more exposed and fragile than regimes that restrict freedom. We must be all the more vigilant, as deceitful rhetoric and hate speech can spread more easily and rapidly now. Social inequalities and economic challenges are fertile ground for new excesses. Unless, as we did in 1944, in the depths of winter and in the face of enemy aggression, we stand up to halt their rise.

The fight for freedom continues in the form of constant vigilance for the appropriate use of freedom. It condemns calumny, polarisation and exclusion. Aiming, instead, to bring together and reconcile.

Standing here, in the presence of veterans, before this monument, which is dedicated to the people who forged freedom and peace, let us make a solemn commitment to continue this fight. Let us serve truth, temperance and justice, with ever greater resolve and in every situation.