After Belgium became an independent country in 1830, it was necessary to choose a flag for the new country. Our national flag has three colours: black, yellow and red. These are the colours of the heraldry of the Duke of Brabant: a yellow lion, with red claws and a red tongue on a black background. Today, the colours are represented in three vertical stripes.

The Belgian flag flies above the Royal Palace of Brussels and the Castle of Laeken when the King is in Belgium. If the King is travelling to carry out official duties and therefore not in the country, the flag is removed from the mast for the duration of the trip.

A flag is flown at half-mast. Placing the flag at half-mast is a sign of mourning, a period of sadness and respect: it means that the King, the Queen, a former King or a former old Queen has died. The Government can also declare a national mourning (in the event of a major disaster, for example). In this case, the flag is also flown at half-mast. 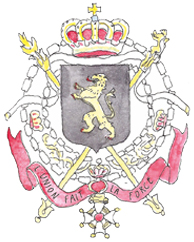 This is the logo of Belgium, a kind of signature in the form of an image (as you find on cars, clothing or biscuits). For example, it features on the letters sent by the King or the Queen. It features the coat of arms (a kind of crest, that is to say the distinguishing mark, the emblem) of the nine Belgian provinces in 1830.

The motto of Belgium was chosen after the 1830 revolution and independence of the country. Here again, reference is made to the 9 Provinces that had become united within a single country. In Dutch, we say: "Eendracht maakt macht". And in German (spoken by some Belgians) "Einigkeit macht stark".

In fact, it is not a symbol: the King of the Belgians does not wear a crown. Nor do the Queens, but they do wear a tiara on special occasions.

Astrid, the fourth Queen of the Belgians, received a splendid tiara decorated with 9 diamonds as a gift from the people when she arrived from her country, Sweden, in 1926. The gemstones represented the nine Belgian provinces at the time.

Our National Holiday is held on the date on which the first King of the Belgians, Leopold I, took the constitutional oath, the 21st of July 1831. To mark the National Holiday, the King, the Queen and the Royal Family attend a military and civilian parade (civilians are the firefighters or the Red Cross for example), in front of the Royal Palace. Personalities are also invited, as well as all citizens. A party is held in the Parc de Bruxelles and the day ends with a big fireworks display. The 21st of July is one of the times when citizens, regardless of origin, age or profession, can assert their pride in being Belgians by coming together to celebrate.

Since 1866, we celebrate King's Day on the 15th of November. This date was chosen because this is the day of Saint Leopold and of Saint Albert. Since then, although not all Kings are no longer called Leopold or Albert, this date has been kept.