This year, the Royal Palace of Belgium will not open its doors to the public due to renovation works.
The next opening is scheduled for the summer of 2024.
Explore the magnificent building of the Royal Palace via our virtual tour: https://virtualtour.monarchie.be

With the Palace of the Nation, the seat of the federal parliament located at the other end of the Royal Park, the Royal Palace of Brussels symbolises the constitutional Monarchy in a manner of speaking. 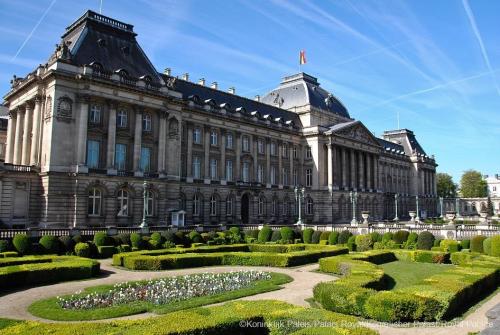 The Royal Palace of Brussels is the King’s administrative residence and main workplace, where he works daily with his staff. In his office at the Brussels palace, the King receives the representatives of political institutions, foreign guests (heads of state, ambassadors) and other guests. In addition to the office of the King and of the Queen, the Royal Palace plays host to the services of the King’s Household: the King’s Cabinet, the General Secretariat, the Civil List, the Military Household, the Protocol and the Queen’s Secretariat. The other members of the Royal Family also have an office at the Brussels Palace, where their staff work. The Palace comprises also prestige reception rooms where various activities of the King and the Royal Family are organised (work meetings and roundtables, receptions, concerts, lunches, etc.). 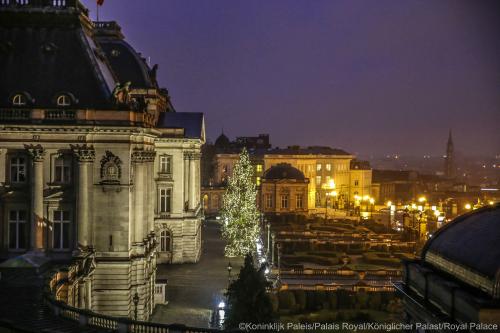 A tradition has been established since 1965 to open the Brussels Palace to the public every summer after the National Holiday of 21 July until September. 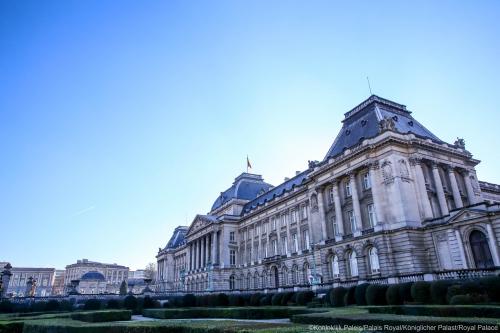 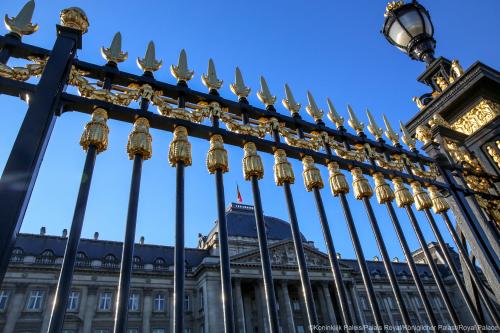 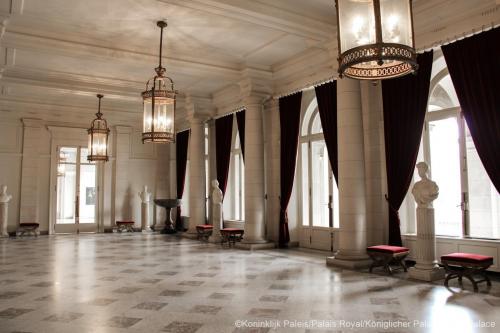 The majestic interior with its imposing proportions was designed by Alphonse Balat for King Leopold II. The pale walls and stone columns, the white marble of the vast staircase, the green marble of the ramp, the gilding, mirrors and bay windows, and the marble Minerva contribute to the harmony of the whole. 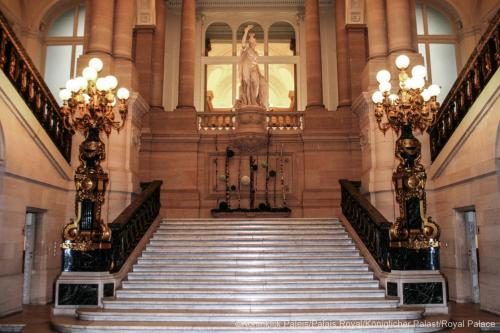 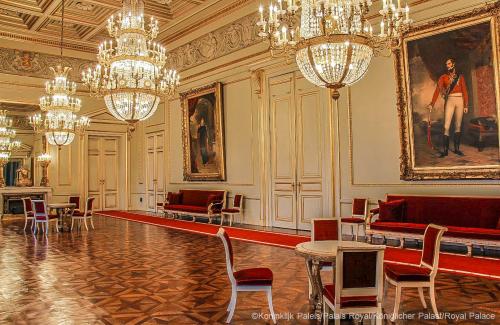 The Large Anti-chamber dates from the Dutch period when the North and South of the Netherlands were united into one Kingdom after the Battle of Waterloo with the accession of King William I to the throne (1815-1830). The political history is depicted on the frieze that adorns the contours of the room. The suspended portraits of Prince Leopold of Saxe-Coburg (future Leopold I) and his spouse Princess Charlotte of Wales are by the English painter George Dawe (1781-1829). 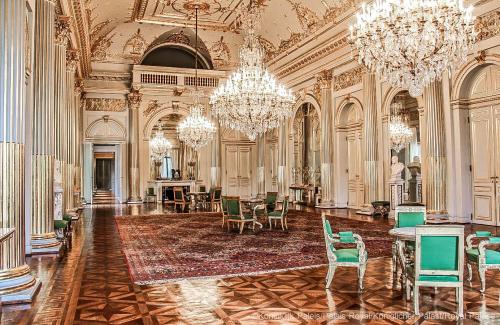 The Empire Room is situated in the oldest part of the Palace. This was the ballroom of the Austrian imperial representative. The gilding and the low reliefs representing dancing angels making music attest to the style at the end of the Ancien Regime. The room was then enlarged during the reign of William I. The female figures above the mirrors date from this period and are the work of Jean-Louis Van Geel. A Kerman rug that could not be exposed continuously to light was placed in the middle of the room on certain occasions. This rug was offered to King Leopold II by Muzaffar al Din Shah of Persia during a state visit to Belgium in 1900.

At the time, this very fine décor served as the setting for concerts, court balls and other ceremonies. This room is still used to hold ceremonies down to the present day. For instance, this is where Ambassadors are received when they present their credentials to the King. 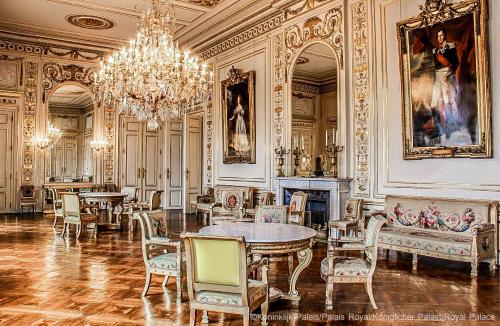 Together with the Empire Room, these two rooms constituted the apartment of state of the Austrian Minister. The original 18th century decorations have been preserved intact. The Empire furniture, a wedding gift offered by the King of the French Louis-Philippe to his daughter Queen Louise-Marie and to King Leopold I still bears its original upholstery in Beauvais tapestry.

The Small Room is decorated with portraits of Queen Louise-Marie and her parents, King Louis-Philippe and Queen Marie-Amélie de Bourbon. This part of the Palace was renovated in the second half of the 19th century, under the supervision of architect Alphonse Balat. The large oil paintings are by Jean-Baptiste van Moer (1819-1884). 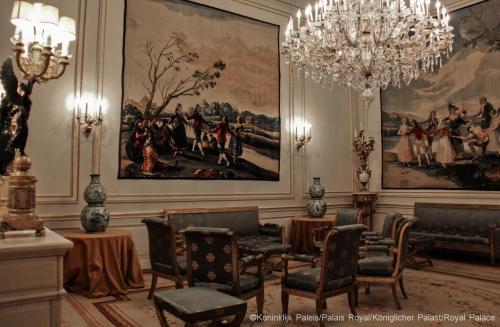 This room owes its name to the tapestries “The Dance,” “The Little Blind Boy” and the “The Water Carrier". These tapestries were woven in Madrid based on a drawing by Francisco de Goya (1746-1828). They were offered to King Leopold I by Queen Isabelle II of Spain. 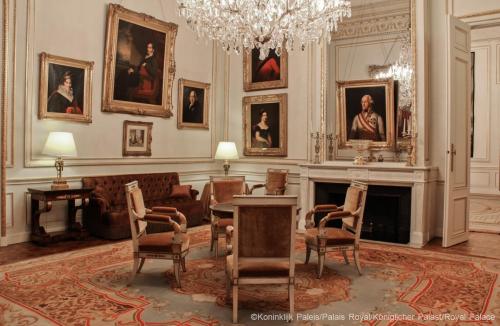 Like the Blue Room, or the Pilaster Room and the Marshals’ Room, this room dates from the time of King William I. The Louis XVI Room was used as an anti-chamber at the time. Alongside portraits of family members of King Leopold I are some paintings of his private collection. The depiction of his first spouse (deceased), “Allégorie de la mort de la Princesse Charlotte,” [Allegory of the Death of Princess Charlotte] is the work of the portraitist and historian Arthur William Devis (1762-1822).

The work entitled Lakei by Michaël Borremans was added to the Louis XVI Room in 2010. 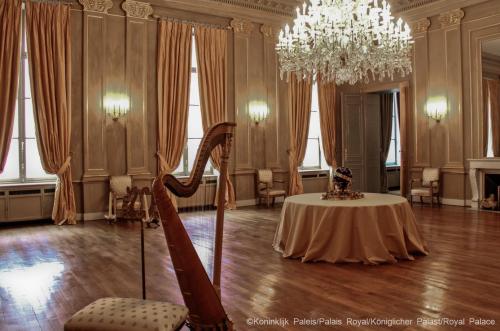 This room was originally a waiting room and was then turned into a dining room for high dignitaries. The Empire style armchairs are part of the furniture which was used by Napoleon Bonaparte and Josephine de Beauharnais. The harp was probably used by Queen Louise-Marie. The portrait of King Leopold I, which dates from 1846, was painted by Franz-Xaver Winterhalter. 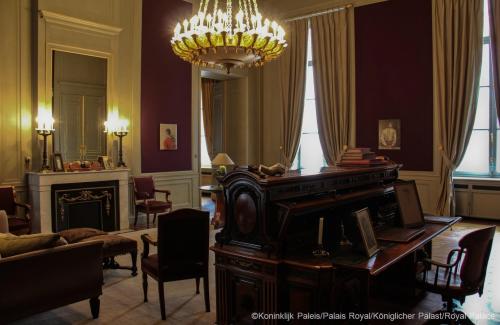 This room was originally the audience room of King William I of the Netherlands. It was refurbished in 2010 and works by Borremans were installed there. The paintings depict a Palace “footman” in unusual situation.

The Erdglobus für den Weltverkehr [Terrestrial Globe for World Traffic] (1909) and the desk with cylinders were originally in the office of King Albert I. The clock is a remarkable work by the famous astronomer and clockmaker Liersois. It consists of different dials that show the date, day of the week, month, and signs of the Zodiac among other things. 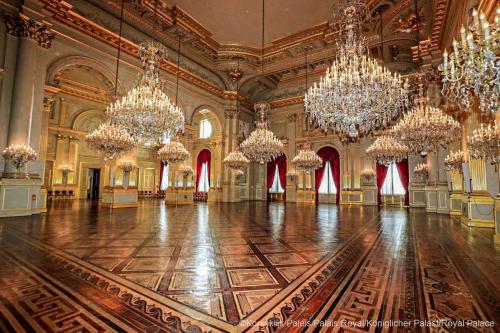 Built under the reign of King Leopold II, this room is decorated in the centre by four low reliefs by Auguste Rodin. They represent the economic activities symbolising the Belgian provinces, with the exception of that of Brabant which hosts the Palace on its territory. The Scheldt and the Meuse, symbols of Flanders and Wallonia, by Thomas Vinçotte, are above the doors. Parquet in oak and exotic woods, and bronze and gilded chandeliers confer a monumental and prestigious appearance to the throne room. 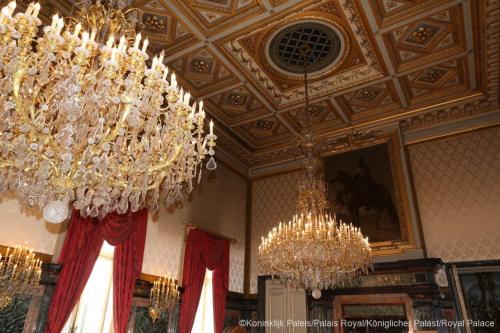 The Marble Room is situated in the rear part of the Palace. It owes its imposing character to the abundant use of green marble and to the portraits of horsemen. The portraits of Godfrey of Bouillon and Charles V are by the artist Louis Gaillait (1870-1887). They refer to the historical origins of the young Belgian State. This room was originally the dining room of King Leopold II. The main kitchens of the Palace are situated in the cellars under the Marble Room, but the ovens, now more than a century and a half old are no longer in use. 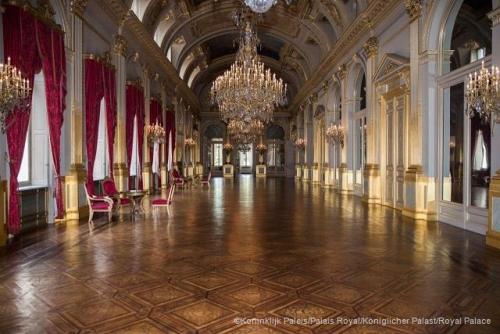 This gala room was built under the reign of King Leopold II. This room is ideal for hosting dinners and receptions down to the present day. The ceiling paintings by Charles-Léon Cardon (1850-1921) represent the different moments of the day. The artist was influenced by the master painters of the Louvres and the Chateau of Versailles. 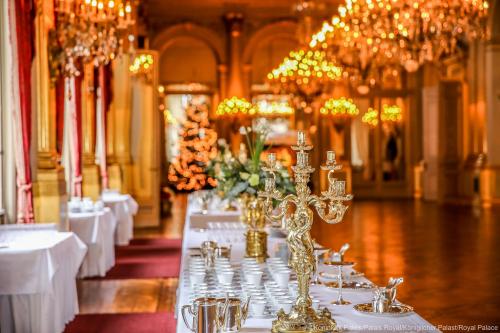 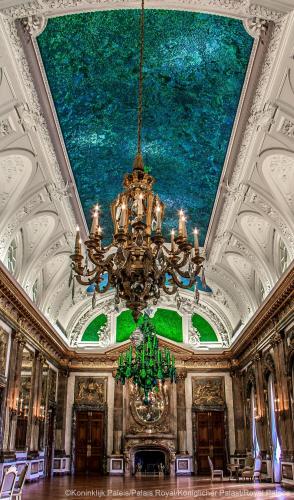 This room, the construction of which began under the reign of Leopold II, evokes the Congo. The walls are decorated with marble and copper. King Albert I had the works completed with mirrors on the walls, which were originally intended to feature allegorical scenes evoking Africa. In 2002, Jan Fabre given the opportunity to create a work of art in this space. He covered the ceiling and one of the three chandeliers with nearly a million and a half jewel beetles. This work was entitled “Heaven of Delight.” The room is used regularly to host events.

This room owes its name to the clock with a bronze reproduction of Michelangelo’s Il Pensieroso (The Thinker) which decorates the chimney. This space is used for lying in state when a member of the Royal Family dies.