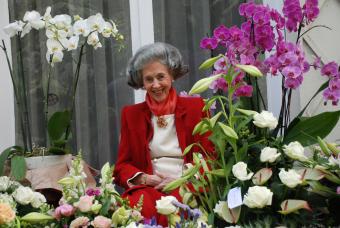 From her earliest youth, her concerns were mainly social and cultural. After training as a nurse, she worked in a hospital in Madrid. In addition to Spanish, Queen Fabiola speaks fluent French, Dutch, English, German and Italian.

On 15 December 1960, she married King Baudouin of Belgium. Since then, Queen Fabiola has shared all the joys and sufferings of the people of her adopted country, and their social and cultural life.

After the death of Queen Elisabeth, widow of King Albert I, in November 1965, she took under her High Protection the charity which organises the Queen Elisabeth of Belgium International Music Competition, of which she is Honorary President. Queen Fabiola keeps a close eye on this annual international music competition, attending the majority of the elimination rounds and the finals of each session.

In September 1993, she accepted the Presidency of the King Baudouin Foundation, established at the wish of the King in 1976 to mark the 25th anniversary of his reign. The Foundation aims at improving the living conditions of the population.

She devotes her personal action to the social field, particularly working with youth and children. She set up a Social Secretariat of the Queen at the Royal Palace, with the task of answering the many requests for help.

Queen Fabiola encouraged various medical and social charities working with children and through the Queen Fabiola Fund for Mental Health, she supports actions to help people with mental problems and the mentally handicapped.

The charity a.s.b.l. Les Oeuvres de la Reine Fabiola enables her to support various socially useful projects serving as an example, and to help persons in difficulty. In recent years, Queen Fabiola has supported study programmes aimed at prevention and treatment of dyslexia among young children. This was done in close liaison with the management of primary education, both Flemish and French-speaking.

Queen Fabiola is also pursuing activities reflecting the preferred option that the King and Queen had to help the most disadvantaged in society. These include an initiative that King Baudouin asked her to take to heart, and which started in February 1992, when she presided the Summit on Economic Progress of Rural Women at the Palais des Nations in Geneva, a meeting which brought together 64 wives of Heads of State and Government. The objective of the International Steering Committee (ISC) for the Economic Promotion of Rural Women is to create and run a movement of First Ladies wanting to respond to the call for help from the most deprived women in the Third World. Her numerous trips around the world and the speeches that she gives constitute the most visible aspect of Queen Fabiola's contribution. In 1997, the ISC obtained consultative status at the United Nations.