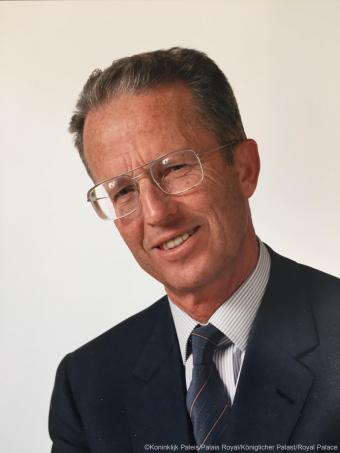 1930
Baudouin, Albert, Charles, Léopold, Axel, Marie, Gustave, Count of Hainaut, was born at the Chateau of Stuyvenberg, near Brussels, on 7 September. He was the second child of H.M. Leopold III, King of the Belgians and of H.M. Astrid, born Princess of Sweden.

1934
A tragic climbing accident claimed the life of his grandfather King Albert I.

On the accession to the throne of his father, King Leopold III, on 23 February 1934, the young Prince received the title " Duke of Brabant ".

1935
On 29 August 1935, the Prince lost his mother, Queen Astrid, who died in a car accident at Küssnacht, Switzerland.

King Leopold and his children left the Chateau of Stuyvenberg, and moved into the Royal Chateau of Laeken.

1940
On 10 May, at the time when Belgium was being invaded, Prince Baudouin, accompanied by his elder sister Princess Josephine-Charlotte and his younger brother Prince Albert, left the country first for France and then Spain.
The Princes returned to Belgium on 2 August.
They continued their studies until 1944, either at Laeken, or at the Chateau of Ciergnon in the Ardennes.

1944
In June 1944, at the time of the Allied landings, Leopold III, Princess Lilian - who he married in 1941 - and the royal children were deported by the Germans to Hirschstein in Germany, and later to Strobl in Austria, where they were liberated by the American Army on 7 May 1945.

Due to the political situation in Belgium, King Leopold and his family moved to the villa "Le Reposoir" in Pregny, Switzerland, when they left Austria in October 1945. They would stay there until July 1950.

Meanwhile, the Prince continued his education at a secondary school in Geneva. In 1948, he carried out a journey to the United States.

1950
King Leopold III, accompanied by Prince Baudouin and Prince Albert, returned to Belgium on 22 July. On 1 August of the same year, the Sovereign decided to ask the Government and Parliament to vote on a law delegating his powers to his son, Prince Baudouin, Duke of Brabant, who became Royal on 11 August.

1951
On 17 July, the Prince Royal swore the constitutional oath and became the fifth King of the Belgians.

1951-1960
On the international scene, Belgium signed the Treaty establishing the European Coal and Steel Community on 18 April 1951. Later, that institution would form the foundations (through the Treaties of Rome, 25 March 1957) for the European Economic Community, now the European Union.

At national level, this period was characterised by a series of problems that often led to serious tensions: the schools issue in which advocates of private education and state education were arguing against each other, the independence of the Congo, the strikes of 1960-1961.

The schools issue would drag on into 1958 and was solved by an agreement, known as the "Schools Pact", ratified by the law of 29 May 1959.

In January-February 1960, a round table was organised in Brussels between leading Congolese politicians and a Belgian government delegation. Independence was officially granted, and a Congolese Constitution was outlined. On 30 June 1960, the King attended the hand-over of power in Léopoldville (Kinshasa).

Still in 1960, the Government had to deal with a difficult socio-economic situation. Flanders was hit by structural unemployment, while the closure of the coal mines was causing upheavals in Wallonia. In order to meet the specific needs of the regions, the Government decided to devise a regional economic policy for the first time. I

In November 1960, it put forward a general recovery programme to the Parliament, known as the "Single Law". During the second half of December, a general strike paralysed the country. It soon appeared that the movement was less strong in Flanders than in Wallonia, where violent incidents occurred. in Wallonia, the strike was of a political nature, since it was aimed at structural reforms of a federal nature.

Tensions between the communities, which were highlighted once again by this event, would be amplified in the following years.

1960
On 15 December the wedding of the King and Doña Fabiola de Mora y Aragón took place.

Doña Fabiola, Fernanda, Maria de las Victorias, Antonia, Adelaïda de MORA y ARAGÓN was born in Madrid on 11 June 1928. One of seven children, Doña Fabiola was the third daughter of Don Gonzalo Mora Fernandez, Riera del Olmo, Count of Mora, Marquis of Casa Riera and Doña Blanca de Aragón y Carrillo de Albornoz, Barroeta-Aldamar y Elio.
From her earliest youth, her concerns were mainly social and cultural. After training as a nurse, she worked in a hospital in Madrid. In addition to Spanish, Queen Fabiola speaks fluent French, Dutch, English, German and Italian.
After the death of Queen Elisabeth in 1965, Queen Fabiola took under her High Protection the charity which organises the Queen Elisabeth of Belgium International Music Competition, of which she was Honorary President until 2014.

Queen Fabiola has a strong personal commitment to social welfare and the well-being of children and young people. She set up a Queen's Social Secretariat at the Royal Palace to answer the many requests for assistance received each year. Through the Queen Fabiola Fund for Mental Health, she supports actions to help people with mental health problems or a mental disability.

Queen Fabiola died on the 5th of December 2014.

From 1966, this principle gave rise to a major challenge about the presence in Leuven of the French-speaking section of the Catholic University. Many Flemish circles insisted that it should be transferred to Wallonia. The transfer (to Ottignies, in Walloon Brabant) soon became a reality.

On 18 February 1970, Prime Minister Gaston Eyskens declared in Chamber that the unitary state had been left behind by events, and that the communities and regions would have to take their place in the renovated structures of the State.

The time had come for the first community revision of the Constitution in the history of Belgium. During the same year, the Flemish Community and the French-speaking Community were granted cultural autonomy, so that they had sole powers to deal with cultural issues.

During the following years, several attempts were made, particularly through the Egmont and Stuyvenberg agreements in 1977-1978 to find a response to community tensions. But to no avail.

This situation became a growing concern for King Baudouin, who was keen to preserve the unity of Belgium. He expressed that view in these words on 31 March 1976, recalling the motto of Belgium ("L'Union fait la Force" or "Unity is Strength): "When the founders of an independent Belgium chose that motto, they were well aware of our diversity, and the necessity to maintain cohesion.

They considered that the regions, with their legitimate autonomy, constituted complementary parts of a whole and should not be envious adversaries. They know that federating was uniting with acceptance of differences, and not disbanding through confrontation". Thereafter, this issue kept recurring, with growing insistence each time, in the Sovereign's speeches.

1976
On the occasion of the 25th anniversary of his reign, the Sovereign decided to devote the funds donated to him by the population to setting up the King Baudouin Foundation, with the purpose of improving the living conditions of the people.

It carries out projects and publishes documents in fields as varied as the battle against poverty and social exclusion, the environment, the architectural and artistic heritage, the training of young people, etc.

1976-1990
In 1980, another reform of the State was created by means of a revision of the Constitution and special legislation. The Flemish and French-speaking communities were also granted powers in cultural and personal matters (health care and assistance to persons). For the German-speaking community, a directly-elected Council was set up.

The statute of the Walloon Region and the Flemish Region were also defined. Enormous powers were granted to the two regions: the regional economy and employment, land use, town and country planning, the environment, housing, etc.

The communities and regions now govern by means of decrees, which have force of law in their jurisdiction. Their financial resources were expanded, particularly with rebates on taxes paid and by limited tax-raising powers (own taxation).

In parallel, the Court of Arbitration was set up to settle conflicts between the communities and regions, and between these entities and the national authorities.

During the first half of the 1980s, the economic and financial problems became acute. The country was hit by a wave of unemployment, while the public debt reached unprecedented heights. In February 1982, the Belgian franc was devalued. Successive recovery plans, providing for pay restraint, budget cuts, reduction in the tax burden on businesses, etc. would gradually bring about a real improvement.

At the same time, the statute of the Brussels Region was established: a directly-elected representative body (the Council of the Brussels Capital Region) will be given a government. Separate French-speaking and Flemish commissions were also set up to deal with community issues in Brussels.

The financing law of 16 January 1989 set the proportion of national taxes to be transferred to the communities and regions, and extended their tax-raising powers.

On a completely different front, a constitutional problem arose in spring 1990. At the beginning of April, the Chamber and the Senate approved a draft law on the liberalisation of abortion. On 30 March, King Baudouin had notified the Prime Minister that he was prevented by his conscience from sanctioning this law, as it is incumbent on the third branch of the legislative power.

The Council sanctioned the law on liberalisation of abortion (3 April 1990) and enacted it. On 5 April, the combined Chambers of Parliament observed the end of the King's impossibility of reigning, so that he could once again exercise his constitutional prerogatives.

1991-1993
The Government addressed the continuation of the reform of the State. To achieve this, they entered into the Accords of Saint-Michel on 28 September 1992. The work done (revisions of the Constitution, special and ordinary legislation) was largely implemented in 1993.

Under Article 1 of the new Constitution, Belgium is now a federal state consisting of communities and regions. The members of the Flemish Council (which deals with both community and regional matters) and the Walloon Regional Council are now directly elected. The membership and the task of the Federal Chamber of Deputies and the Senate were revised.

The powers and responsibilities of the communities and regions were expanded, particularly concerning foreign relations.

Finally, the province of Brabant was split into two provinces: Flemish Brabant and Walloon Brabant.

In what would turn out to be his final speech, the King set out his vision in these terms: "This year, we have once again introduced a major reform of our political structures. This is the finishing touch to the amendments made between 1970 and today. (...) The Parliament wanted to define a new balance between the autonomy of the regions and communities on the one hand, and the essential unity and cohesion of the country on the other" (21 July 1993).

1993
On 31 July, the King died in Motril in the south of Spain. The King suffered a heart attack while the royal couple were on holiday in their Spanish residence.