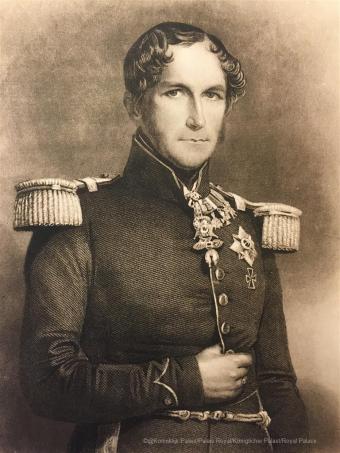 1795
Leopold was appointed by the Russian Czar as Colonel of the Ismailovski Regiment of the Imperial Guard. He became a general seven years later.

1806
The Duchy was occupied by Napoleon's troops. Leopold stayed in Paris and became a familiar figure at the Imperial Court. The Emperor wanted to make him an Aide de Camp. Leopold refused. He would then participate in the campaigns against Napoleon.

1815
Leopold acquired British nationality, was made a Field Marshal, and married Princess Charlotte, heir to the British throne. A year later, she would give birth to a stillborn child, before dying herself.

1830
Leopold refused the crown of Greece.

1831
On 21 July, he took the oath as the first King of the Belgians He devoted most of his reign to consolidating the young state.

On 2 August, the Dutch army invaded Belgium. The intervention of the Great Powers saved the new state. Its status was reduced, particularly by annexation of some of its territory and the obligation to pay a toll to the Netherlands for ships to sail on the Scheldt. (Treaty of the 24 Articles)

1832
On 9 August, Leopold married Louise-Marie, daughter of Louis-Philippe, King of the French.

1835
Inauguration of the first railway line (Brussels-Malines) in continental Europe. This was the culmination of a project on which the King had been working since 1832.

1842
Leopold attempted to obtain legislation on the labour of women and children. But the time was not ripe.

1848
A Republican revolution removed Louis-Philippe from the throne of France. Its repercussions were felt throughout Europe, but spared Belgium, largely due to the diplomatic action of the King.