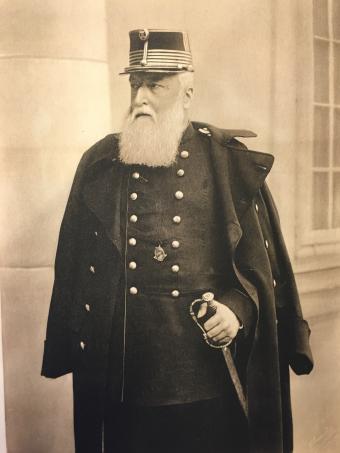 1835
On 9 April, birth in Brussels of Leopold, Louis, Philippe, Marie, Victor, son of Leopold I and Louise-Marie.

1876
On 12 December, the King Palace convened an international conference in Brussels of scientists, geographers and explorers, focusing on the discovery of the centre of Africa. This resulted in the setting up (1877) of an "association for the civilisation and exploration of Central Africa".

1878
Leopold II set up, with the cooperation of the British explorer Stanley, the Study Committee on the Upper Congo, converted in 1879 into the International Association of the Congo.

1885
The Berlin Conference recognised the independent state of the Congo, of which Leopold II became the Sovereign. That same year, the Belgian Parliament authorizes the King to be the Head of State of Congo.

1890
In July, during the Brussels International Conference, a treaty was signed against African slave trade and slave smuggling. This treaty forms the basis of a campaign against slavery in Africa.

1904
Following the excesses committed by the Europeans in Africa, Leopold's reputation and his overseas venture were questioned. The King set up an International Commission of Inquiry, which recognised the merits of the royal action in Congo, while pointing out abuses and shortcomings.

1908
The law of 18 October made the independent State of the Congo a Belgian colony.

1909
On 14 December, the King signed the law on compulsory military service. He died three days later.