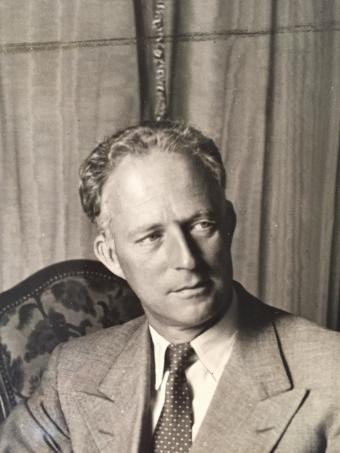 1901
Birth in Brussels, of Leopold, Philippe, Charles, Albert, Meinrad, Hubert, Marie, Miguel, son of Prince Albert and Princess Elisabeth, future King and Queen of the Belgians. He was the great nephew of King Leopold II, who was reigning at the time, and was his godfather.

1909
On the death of Leopold II, Albert acceded to the throne and Leopold became the Duke of Brabant , the title given to the heir to the throne in Belgium.

1920
He entered the Military Academy.

1922
He was made a Second Lieutenant in the 1st Grenadiers.

1925
He undertook a long study trip to the Congo.

1926
In Stockholm, Prince Leopold met Princess Astrid of Sweden, born on 17 November 1905, daughter of Prince Karl and niece of King Gustav V. The wedding took place in November of the same year.

1935
During a trip to Switzerland, the Queen died in a car accident at Küssnacht, and the King was injured.

1939
Belgium announced a neutrality policy. The country had until then been an explicit ally of France and the United Kingdom. The Sovereign hoped that this would spare Belgium from the imminent German threat.

1940
On 10 May, Nazi Germany invaded Belgium nevertheless. On 28 May, King Leopold, Commander-in-Chief of the Belgian Army, was compelled to surrender unconditionally.

He took this decision against the wishes of the government (which had withdrawn to France), and it would be one of the reasons for the "Royal question" that would lead to the abdication of the Sovereign.

1941
Leopold married Mrs. Lilian Baels, who then took the title of Princess de Rethy. Three children were born of this marriage: Alexandre, Marie-Christine and Marie-Esmeralda.

1944
On 7 June, the day after Allied troops landed on the Continent, the King and his family were deported to Germany and later Austria.

They were liberated on 7 May 1945 by American troops. The King did not return immediately to Belgium. Due to opposition from part of the population, Prince Charles, Count of Flanders, and the King's brother, continued to rule as regent due to Leopold III's "impossibility of reigning".

In the absence of a political solution to the controversy about the King, the government adopted a law organising a referendum on whether or not the King should return. The response of the electorate was 57.68 % in favour, with sizeable regional disparities.

On 20 July, with a majority "yes" vote in the country as a whole, the government asked the Chambers of Parliament to vote that it was no longer impossible for the King to reign.

On 22nd July, the King returned to Brussels.

1951
Leopold III decided that it was impossible to reconcile Belgians about him as their King. So in a spirit of reconciliation, he renounced the Throne. Prince Baudouin succeeded him on 17 July. After that, King Leopold devoted his time mainly to scientific research and journeys of exploration.