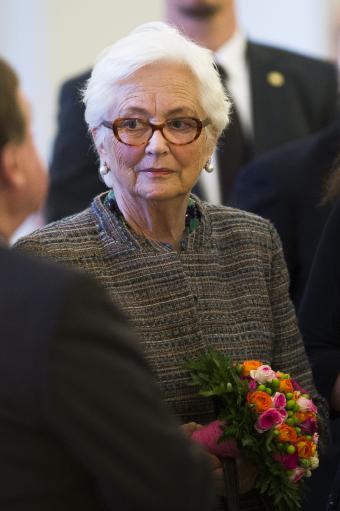 Her Majesty Queen Paola was born Princess Ruffo di Calabria, on 11 September 1937, at Forte dei Marmi in Italy. She is the youngest of the seven children of Prince Fulco Ruffo di Calabria, a First World War flying ace, and Countess Luisa Gazelli. Her grandmother on her father's side, Laure Mosselman du Chenoy, was Belgian.

Queen Paola spent her entire youth in Rome, where she completed her classical secondary education in Latin and Greek.

Apart from her activities in the company of King Albert II, Queen Paola  devotes time to issues that are close to her heart, mainly in the social and cultural sphere.

Set up in 1992, the Queen Paola Foundation enables Queen Paola to focus on integration and training for young people. The Foundation's activities are geared towards social integration, support for teachers at all levels of the education system and schools in socio-economically disadvantaged areas.

Queen Paola takes a keen interest in the protection and preservation of Belgium's heritage. She makes numerous visits to cultural sites, from Beguine convents to early 19th century industrial facilities.

Queen Paola is interested in both new and traditional crafts, and takes every opportunity to encourage the exercise and teaching of craft professions.

Queen Paola keeps abreast of contemporary art and regularly supports major exhibitions and artistic performances both in Belgium and abroad. On the initiative of Queen Paola, contemporary artists have had the opportunity to design and make original works within the Palace of Brussels.

She is Honorary Chairman of the Queen Elisabeth Music Chapel and of Missing Children Europe.

Family plays a key role in Queen Paola's life. Like any grandmother, Queen Paola enjoys spending time in the company of her grandchildren. She also enjoys long walks in the forest with King Albert II, which offer an opportunity to appreciate the beauties of nature and the changing seasons.