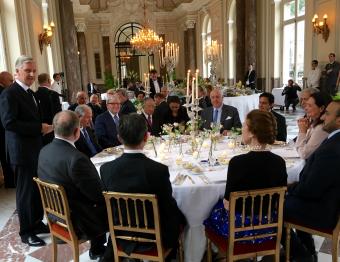 It gives me great pleasure to welcome you all to Belgium. I am very pleased to be hosting this high level dialogue under the auspices of the Asia Society. I am particularly grateful to our Asian and American guests for being with us. Your meeting here in the heart of Europe is important. The European voice and Europe’s own experience of regional cooperation and projection in the world are essential elements in a reflection on the future world order.

Brussels is a mirror of Europe in at least two ways. Firstly, Brussels is a city which grew out of 19 towns. As a consequence it tends to be a bit kaleidoscopic, like the European Union itself. Its townships are self-governing, but a regional government keeps an eye on the general interests and overall needs of the Brussels Region.  The rules of subsidiarity and federal loyalty are practiced here on a daily basis. Secondly, nearly two Brussels residents out of three are foreigners or Belgians who were not born in Belgium. Constantly drawing in talent from all over the continent, Brussels really has become the Union’s capital.

Playing a major role in the construction of the European Union has given Belgium more influence over its environment than ever before. Thanks to the EU, both our prosperity and our security have increased. Likewise, thanks to the EU, we have, on many occasions, been able to transform formal sovereignty into real influence. Indeed in time, every member country has gained in prosperity and influence, but the case of Belgium is a prime example.

Of course - and many today tend to forget this - European integration remains a project in the making. Its many advantages have been overshadowed recently by the turbulence produced by globalization, which is testing the very fabric of our Union. Very soon after its creation, in 2002, our new common currency had to stand up to the worst financial crisis since the Great Depression. Today, another important but still incomplete stepping stone in our integration, the removal of internal border controls, in the 26 countries that form the Schengen area, is under pressure due to the outbreak of humanitarian crises in the Middle East and North Africa.

I am confident, however, that we will continue to show our resilience and our resolve by further improving our common policies. At first glance, the return to national economies and national borders may seem tempting, but the cost would be so high that in the end self-interest will prevail and the Union will prove, once again, its added value for most, in not all of us. In fact, we know very well what is needed for our Union to become ever more relevant in a globalized world. We need to continue to work towards the difficult balance between unity and diversity. We need to multiply economic and social win-wins.

What brings us here today is the awareness that we too have some common challenges to tackle. In fact, all world challenges – environment, natural resources, education, poverty – have as much potential of uniting than of dividing us. Some threats provoke us on a daily basis. Confronting the root causes of terrorism and extremism; countering the excesses of nationalism and illusionary collective identities; creating new bridges for economic and trade relations. These are some of the urgent issues that require our attention and our action.

Firstly, Belgium was hit recently by terrorist attacks, as were the US so grievously in Orlando last Saturday. And so were many other countries in a near past, too. These tragic events prove that, more than ever before, we too may feel the effects of civil wars and disorder occurring in faraway countries. In order to avoid more such acts, either in Europe, Asia or the US, we need to foster stronger international cooperation, to address the root causes of extremism and to develop a greater sense of openness to otherness.

Secondly, nationalistic and even xenophobic tendencies are reappearing. This is happening now, despite the fact that precisely the same focus on ‘us versus them’ caused such tragedy and devastation in the 19th and the first half of the 20th century. Opposition based on national interest, race or religion can lead to devastating conflict. We do not want this kind of future for Europe, for the US or for Asia. We need to counter these negative tendencies.

Thirdly, we are witnessing the perpetuation of economic disputes, trade and currency wars, as well as new forms of protectionism and dumping practices. In a slowing world economy, someone has to pay. These practices create tensions which, ultimately, only cause everyone more harm. Opening up our markets and enlarging our trade relations benefits everyone.

These are all issues in which more international cooperation is needed. In a rapidly changing world, our institutions, be they at a regional or global level, must adjust too. We have a historic responsibility to lay the foundation of tomorrow’s world order. Asia, the US and Europe also have a strategic interest in exploring new avenues. I am looking forward to attending your debates and listening to your views. I am convinced that our deliberations can contribute to the creation of a new common state of mind. I wish you all success.