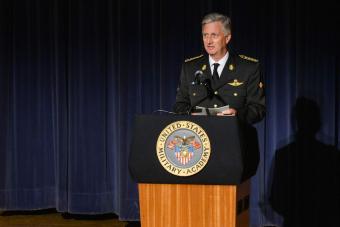 at the United States Military Academy,

Good afternoon. Seeing you all gathered here today brings back great memories of my time at the Royal Military Academy of Belgium. And of the pride I felt when I completed my fighter pilot and paratrooper training, nearly forty years ago. Just before studying for two years in the United States. So I know what you sometimes have to endure - and also how it makes you grow. And, being an Army man myself, I can fully subscribe to the spirit of : "Go Army, beat Navy!"

Almost one hundred years ago, on the morning of 24 October 1919, my great-grandfather King Albert 1st was welcomed at this Academy by the then superintendent, Douglas MacArthur. To the cadets gathered before him, he expressed his gratitude and admiration for your Academy, which had trained Europe's liberators so well. He told them that, during the four years of the First World War, he had understood – and I quote "the importance for every officer and every soldier to be convinced that they are serving a noble and just cause".

In August 1914, my country had the status of neutrality. Nonetheless, it was faced with an ultimatum from the German emperor to allow his troops to pass through Belgian territory to invade France. King Albert and the Belgian government rejected the ultimatum. The Belgian army then resisted alone for several weeks, delaying the invasion and allowing the French army to prepare. After three months of fierce resistance in Belgium and France, the front stabilized. That was the start of a long phase of trench warfare in Flanders' Fields, which was symbolized in Belgium by the Ypres Salient.

The courage with which the Belgians had defended the cause of neutrality, the sense of sacrifice that they had demonstrated and the violence of the repression that they had suffered, particularly the civilian population, gave rise to an international wave of solidarity, especially in the United States. The USA’s entry into the war, in 1917, would be a turning point, which would lead to the German surrender one and a half years later. Over one million American soldiers were involved in the Battle of the Argonne Forest. We will never forget this chapter in our shared history, the gestures of solidarity shown by the American people and the heroism of its soldiers who came to fight for our freedom.

Just 25 years later, at the end of 1944, more former West Point cadets were at the forefront of the Battle of the Bulge in Belgium, one of the largest battles ever fought by the United States Army. The names of your generals, Eisenhower, Patton, Bradley, Devers, McAuliffe, resonate in all our memories. Over 600,000 American soldiers took part in that decisive battle before the final victory. Bastogne held out, thanks, in particular, to the determination and courage of soldiers who were trained at West Point. Since then, Belgium and the rest of Europe have been able to enjoy the longest period of peace and freedom in their history. Today, on behalf of the Belgian people, I want, once again, to express our gratitude to the United States.

From Ypres to Bastogne, to the present day, it is the belief in a noble cause that is our guiding principle. During its history, Belgium has been the theatre of many fierce battles. On its soil, empires have fought and totalitarian ideas have been defeated. But on this land of blood, out of the ashes of destruction, we have built a lasting peace. Today, Belgium is home to the headquarters of NATO and SHAPE. And Brussels, the capital of Belgium, has become the capital of Europe. The European Union is a visionary project born out of deep wounds. A huge, audacious project. Together, we have built an unprecedented alliance of countries that have decided to unite their futures, by sacrificing part of their sovereignty.

This project of peace, solidarity and prosperity is built on understanding and forgiveness between peoples that tore each other apart in the past. Only such reconciliation can pacify the memory and allow us to construct a better future, by learning the lessons of the past. Deep reconciliation is the foundation of lasting peace. The same applies between countries as between people. We must talk to each other, listen to each other, understand each other’s wounds and humiliations, and take the necessary steps towards one another. Memory matters. It is, as Saint Augustine said, "the present of the past". It creates profound links between nations, like those between the two sides of the Atlantic. Belgium is proud to be a land of memory and dialogue, a land where reconciliation and cooperation have become a reality.

Belgium is also proud to be home to NATO and SHAPE. The Alliance's physical ties to Belgium reflect those that exist between the United States and my country. Belgium has a long record in standing alongside American troops. From 1951 to 1955, the Belgian United Nations Command, the so called "Brown Berets", fought in the Korean War. More recently, Belgium participated in missions in Afghanistan, and in the coalition against Daesh in Iraq and Syria. My country has also played its part in operations in Europe, in the Balkans some years ago, and in the Mediterranean and the Baltic countries today, in support of its Allies. Inaugurated last year, the new NATO Headquarters is the place where we make plans and take actions together, in pursuit of the common goal of peace, democracy and well-being for our peoples. My country offers its foreign visitors, including thousands of American soldiers and civilians, a much appreciated environment and quality of life. A loyal and reliable ally of NATO, Belgium is also convinced of the necessity of developing a solid and integrated European pillar, capable of taking on greater responsibility in terms of defense.

We live in fascinating times that are opening up vast new prospects for humanity. But we cannot allow ourselves to be overwhelmed or distracted. Because, while today's threats are perhaps not manifested in direct and open confrontation with the enemy, as was the case in the trenches in 1914-18, they are no less real. New technologies and developments in artificial intelligence are driving our progress but also give rise to hybrid warfare. New communication tools bring us closer to each other but also allow for discourses that polarize opinions, divide alliances and provoke hatred. Our democracies are under pressure. With vigilance and a focus on the common good, we can seize these new opportunities while guarding against these threats.

On both sides of the Atlantic, fundamental questions are being asked. Extremisms are increasing in many parts of the world. Terrorist attacks are causing infinite suffering in several regions, including Europe. Millions of people need humanitarian assistance, but the system is reaching its limits. As you know, thousands of migrants continue to risk their lives crossing the Mediterranean Sea hoping to reach Europe. These issues remind us that there is no alternative but to bridge the gap between peoples and cultures. This is the cause that we must serve.

The motto of your prestigious Academy, "Duty, Honor and Country", seems more relevant today than ever. It is our duty and our honor to replace division and hatred with harmony and care for one another. This is one of the primary duties that we all have as human beings : to fight hatred and humiliation.

As General MacArthur said to your predecessors fifty-six years ago, others will debate the controversial issues, which divide men's minds. The task of being the ultimate defenders of our values, and of the peace that must guarantee them, falls to you. Like your predecessors, you have decided to build your lives on the sense of duty and the spirit of service. Your choice is more than that of a career. It is a vocation. It is being called to fulfil a mission in which you know you can give the very best of yourselves. As I have the opportunity to pay tribute to your forefathers for what they did for my country, I also congratulate you for living up to your vocation and for defending, together with us, Europeans, the values in which we believe.

I am delighted to share this moment with you today. I hope that each and every one of you makes the most of your training to become, like your many predecessors, friends and guardians of peace.