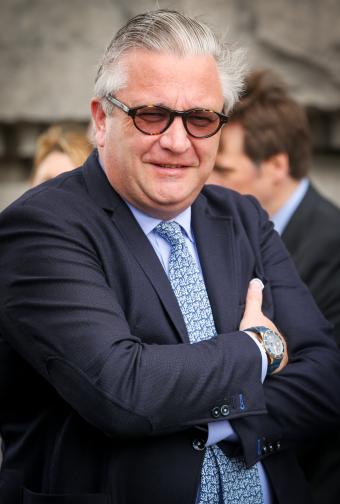 His Royal Highness Prince Laurent was born on 19 October 1963 and is the youngest son of King Albert II and Queen Paola.

Following his secondary education, partly in Dutch at Pius X College in Antwerp and partly in French at the Royal Cadet School in Laeken (Brussels), he joined the Royal Military Academy, where he was educated as an officer of the armed forces. On completion of his academic studies, he followed in his father's footsteps and joined the Belgian Navy.

He spent his time as a naval trainee on board various frigates and minehunters. The Prince was promoted to the rank of sub-lieutenant in September 1985 and was sworn in as an officer on 30 October of the same year. Like all deck officers in the Belgian Navy, he had to specialise in a specific area. Prince Laurent chose to become a diver and a helicopter pilot.

In September 1989, Prince Laurent was promoted to the rank of lieutenant. A few months later, on completion of his training, his uncle, the late King Baudouin, presented him with his helicopter pilot's wings.

Prince Laurent was promoted to commander on 15 November 1994.

On completion of his military training, the Prince travelled to the United States where he undertook internships in various private companies, then at the International Monetary Fund, the World Bank and the United Nations, in development and environment programmes.

Back in Belgium, he spent several months as a trainee at the European Commission, where he was active in a think tank about the quality of life and the environment, for which he was awarded the Emile Noël Prize.

Prince Laurent is President of the Prince Laurent Foundation, which was set up in 1995 to promote the welfare of domestic and wild animals. He is also Chairman of the European Research Group for Alternatives in Toxicity Testing (ERGATT).

The wedding of Prince Laurent and Miss Claire Coombs took place in Brussels on 12 April 2003. She became Princess of Belgium in 2003.

Prince Laurent was promoted to the rank of captain of the Belgian Navy on 26 June 2004.

The Prince is also Honorary President of the National Orchestra of Belgium.

The Prince is involved in the public activities of the Royal Family.