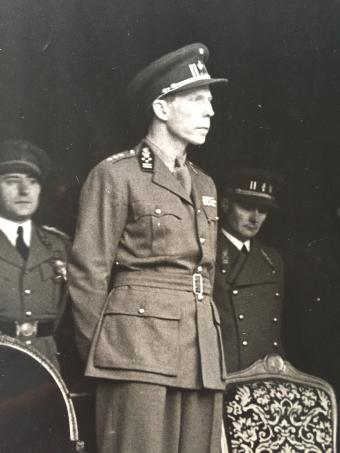 1910
On 31 January, King Albert I bestowed the title of "Count of Flanders" on Prince Charles.
Prince Charles received his primary education in Brussels.

1915
Prince Charles, who was staying in the United Kingdom, continued his education there before joining the Royal Naval College at Osborne on the Isle of Wight.

1918
The Prince was admitted to the Royal Naval College in Dartmouth, a cadet training school for future Royal Navy Officers.

1921
Having completed his naval training in Dartmouth, Prince Charles spent periods on board various British warships.

1926
He attended courses at the Royal Military Academy and was assigned to the First Pathfinder Regiment, where he was appointed Second Lieutenant. He regularly spent periods serving in this Regiment and attended training camps.

1926-1939
Like other members of the Royal Family, Prince Charles fulfilled various official engagements throughout the country.

1939
On 19 September, he was made a Colonel. During the period of mobilisation, and then during the 18-day campaign, he was assigned to the Headquarters of the Cavalry Corps.

1940
During the period of our country's occupation by German troops, Prince Charles led a quiet life in Brussels. During the months preceding the liberation of Belgium, he lived under a false identity in a Walloon village.

1944
On the liberation of Belgium, King Leopold III was not in the country, having been deported to Germany by the occupiers. As the Constitution provides for the possibility of a Regency, Prince Charles was made Regent of the Kingdom by the Combined Chambers of Parliament.
On 20 September 1944, Prince Charles took the constitutional oath. He exercised the royal prerogatives until 20 July 1950.

1944-1950
During the Regency, home policy was dominated by the Royal Question, and the consequences of the Second World War; No fewer than nine governments came and went between September 1944 and August 1950.

Economic activity was quickly re-established. In October 1944, Finance Ministers Gutt implemented a package of budget cuts. Belgium also benefited from American aid under the Marshall Plan. Reconstruction of the property destroyed was stimulated by compensation for war damage and by the law of 29 May 1948, which made grants available for the construction of social housing.

An important political milestone was the introduction of votes for women in parliamentary elections (law of 19 February 1948).

In the social field, the Decree of 28 December 1944, for which the foundations had been laid before the war, gave rise to the social security system that we have today. Later draft legislation provided for the setting up of joint committees and works councils, the Central Economic Council and the National Labour Council.

On the international stage, a number of steps are worthy of mention: the Foundation of the economic union between Belgium, the Netherlands and Luxembourg (Benelux) in 1944, as well as Belgian membership of the United Nations Organisation (UNO) in 1945, of the North Atlantic Treaty Organisation (NATO) in 1948 and the Council of Europe in 1949.

The war had pushed the quarrels between Flemish and Walloons into the background, but they did not disappear. In order to tackle the problem holistically, the law of 3 May 1948 set up the "Study Centre for the National Solution of the Social, Political and Legal Questions of the Various Regions of the Country" (the Centre Harmel, which takes its name from its founder, the Walloon Christian Democrat member of parliament, and future Prime Minister Harmel).

1950
Prince Charles withdrew from public life. He stayed mainly in his village on the royal estate at Raversijde (Ostend). The Prince draws and paints, and has many contacts with artistic circles. His works, which he exhibited regularly between 1973 and 1981, are signed "Charles of Flanders".